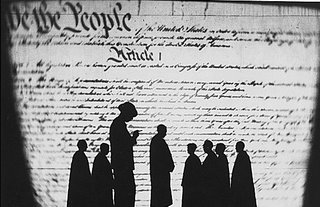 The Harrison County (West Virginia) Board of Education had another meeting July 18th but apparently did not vote on the issue of whether or not to remove the portrait of Jesus from the hallway outside the principal's office. Nor has the board decided on whether to accept any of the six offers of free legal representation it has received in the case.
Frankly, it is hard to see how this can end well for the district. The Sixth Circuit Court of Appeals has already decided a quite similar case, finding the placing of a portrait of Jesus in the hallway of a public school unconstitutional in Washegesic v. Bloomingdale Public Schools, 33 F.3d 679 (6th Cir. 1994), which, unfortunately, is not on the web that I can find.
The closest thing to a "justification" I can find for keeping the portrait is this bizarre screed by Michael Queen, a newly seated member of the Harrison County School Board, taking his place only after the original vote.
.
The basic theme is that the portrait is "on loan" to the principal from a retired counselor who had it hanging in his office. Supposedly, this picture has hung in one spot or the other for the last 35 years (a non sequitur since Constitutional violations don't disappear with age). The crux of the "defense" is that "[t]he decision to hang the portrait up in his office is Lindy Bennett's (the school's principal) constitutionally protected right to freely express his personal opinion."
About the only thing that can be said about that claim is that someone must have gotten a hold of William Buckingham's oxycontin. It is stunning that anyone might consider for a moment that such a lame story could fly in a federal courtroom.
The only thing worse is the quote mining of the Supreme Court that follows:

The Supreme Court is very clear that "the right for one to freely express themselves regarding their religious preferences or beliefs does not stop at the schoolhouse door".

Now I cannot be 100% sure that the Supreme Court has never said words to that effect but my best efforts and the Westlaw database cannot find it. About the closest I can find is from the Second Circuit in Melzer v. Board of Education of City School Dist. of City of New York, 336 F.3d 185 C.A.2 (N.Y.), 2003:

Under what is now called the Pickering balancing test (refering to the Supreme court case, Pickering v. Board of Ed. of Tp. High School Dist. 205, Will County, 391 U.S. 563, 88 S.Ct. 1731), public employees like plaintiff teacher do not leave their First Amendment rights at the schoolhouse door . . .

This line of cases, however, does not deal with the Free Exercise clause of the First Amendment but, instead, with issues of free speech, often in forums outside the government office. More importantly, the above is immediately followed by " . . . even though it is plain that those rights are somewhat diminished in public employment."
.
In brief, these cases recognize that government can restrict the speech rights of its employees when it harms the legitimate interests of the government. Avoiding the violation of student's and parent's rights is an obvious interest of the public schools that takes precedence over any minimal restrictions necessary on the Free Exercise rights of teachers, who have all the time outside school hours to practice their religion as publicly as they want.
Queen attempts to muddy the waters by asking if a teacher could wear a cross as jewelry or have ashes on his or her head from Ash Wednesday mass but is unconvincing because of the clearly personal, and not official, nature of such items. That is considerably different from a portrait associated with the most "official" part of the school, the principal's office. Nor is the example of having "meat free" meals on Friday during Lent apropos. Accommodating all students religious beliefs in such matters is not only permissible but probably required. Thus there should also be pork-free meals for Jewish and Moslem students. But an attempt to justify this portrait on that grounds admits the claim about the principal expressing his rights is bogus and raises the question of what visual accommodation is being made for non-Christian students.
Then Mr. Queen shows the nature of his real concerns which (surprise, surprise!) have nothing to do with the welfare of the children in the district:

Will the white crosses marking the graves of our military men and women be taken down? Will the Ten Commandments and symbols of Christianity be removed from our federal buildings and courthouses?

Mr. Queen pins his hopes on the Supreme Court being "different than it was" without considering how blatant and transparent the "defense" of the district is. As the Rightous Right found out in Dover, judges may not agree that they have sold their souls for anyone's pieces of silver. And even the ones that have, may not appreciate the attempt to make it obvious.
Unfortunately for the children of Harrison County, the only good Mr. Queen may do for their education is serve as an example of how dangerous ideologues are to good government.
Link - Posted by John Pieret @ 9:54 PM

Comments:
The Supreme Court is very clear that "the right for one to freely express themselves regarding their religious preferences or beliefs does not stop at the schoolhouse door".

"First Amendment rights, applied in light of the special characteristics of the school environment, are available to teachers and students. It can hardly be argued that either students or teachers shed their constitutional rights to freedom of speech or expression at the schoolhouse gate. This has been the unmistakable holding of this Court for almost 50 years."

(I don't know why the formatting came out that way, sorry.)

That was also a possibility that I looked at, but Tinker (despite the dicta about teachers) was all about students' rights to protest the Vietnam war by wearing black armbands . . . hardly what any sane person would use to argue this case.

Wait! We're talking about Queen and his ilk, aren't we?