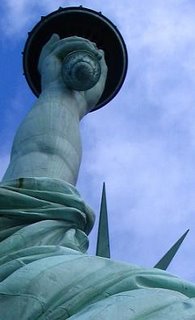 I've been rather neglecting Jurisdynamics of late, which is a mistake. As proof of that, see Jim Chen's moving article, "Born in the U.S.A." about the attempt by the Righteous Right to slam the door shut on America, given that their ancestors already safely made it in.
Specifically, Professor Chen, Harvard Law School graduate, Fulbright Scholar, clerk to Supreme Court Justice Clarence Thomas, James L. Krusemark Professor of Law at the University of Minnesota Law School, prolific author and himself an immigrant, addresses the euphemism-drenched Enforcement First Immigration Reform Act of 2005 (EFIRA), H.R. 3938. The law tries an end run around the 14th Amendment that says:

EFIRA's Section 701, "Citizenship at Birth for Children of Non-Citizen, Non-Permanent Resident Aliens," would amend the Immigration and Naturalization Act to the following:

Professor Chen is both eloquent and right when he points out that children do not ask to be born and have no control over the place or circumstances of their birth. The attitude that the mothers of these children are "driven by a perfidious combination of greed and sloth to enter the United States illegally in order to give birth to 'anchor babies' and thereby to spark 'chain migration'" is nothing but odious demagoguery. As Professor Chen says:

No woman is evil who seeks to bring her child into a world of promise and not of squalor.

What is more, that desire is the most fundamental of American values, the very basis of our existence as a nation, and far nobler than the pious pandering that issues from the so-called "values candidates."

For this affront to core American values, Congressman J.D. Hayworth (R-Ariz. 5), sponsor of H.R. 3938, deserves to lose his reelection bid. So do his 33 cosponsors.

Comments:
This guy is full of sanctimonious crap. Somehow he can't possibly accept that the fact that a woman could conspire to shamelessly use a child as a pawn in an attempt to circumvent laws enacted by our Congress, laws in full compliance with our Consitution.

Well. I called it odious demagoguery and there is nothing in that which would come close to changing my mind. And since that wasn't what Professor Chen said, your reading comprehension is fully appropriate to those who fall for such poisoned rhetoric.

As to your interpretation of the "Consitution," I think I will go with the opinion of a distinguished professor of law (which comports with my own, more limited, research anyway), and with Justice Brennan:

Use of the phrase "within its jurisdiction" thus does not detract from, but rather confirms, the understanding that the protection of the Fourteenth Amendment extends to anyone, citizen or stranger, who is subject to the laws of a State, and reaches into every corner of a State's territory. That a person's initial entry into a State, or into the United States, was unlawful, and that he may for that reason be expelled, cannot negate the simple fact of his presence within the State's territorial perimeter. Given such presence, he is subject to the full range of obligations imposed by the State's civil and criminal laws. And until he leaves the jurisdiction - either voluntarily, or involuntarily in accordance with the Constitution and laws of the United States - he is entitled to the equal protection of the laws that a State may choose to establish. - Plyer v. Doe

Not only does EFIRA go against the real values of America and violate our Constitution but, if you apply it logically, it becomes a two-way street, with a quite nasty result. Notice where Justice Brennan says that an illegal alien is equally "subject to the full range of obligations imposed by the State's civil and criminal laws ... until he leaves the jurisdiction" as he is entitled to its protections? If you declare a person not to be subject to the jurisdiction of the United States, that includes the courts of the United States. And no court without jurisdiction can try a person for any crime. This idiot law, if not declared unconstitutional, would arguably render any of the children it covers immune from any action except deportation, no matter how great the crimes they may commit.

We may have to allow mouth breathers to vote, but we should not allow them to write laws.

Plyler v. Doe is an idiotic ruling, as it preclude U.S. citizens from enacting laws governing benefits that they intend only for themselves. If the people only wish to fund educations for their progeny, and not that of foreign nationals, they are prohibited from doing so. This addled output from the drooling nine can be extended to just about any benefit citizens wish to reserve for themselves alone. By the way, is the fact that you misspelled Plyler a function of your lack of reading comprehension?

Please cite the official code of American values. As far as I can discern, the Constitution is the sole source of common values for Americans. Has a new set that I seem to be unaware of been ratified by the people? The Constitution's preamble clearly states that it was written for the citizens and their progeny. It says nothing about preserving the nation for the welfare of foreign nationals. It was for the very purpose of divorcing themselves from foreign influence that the founding fathers wrote the Declaration Of Independence. It's difficult to believe that they were considering the immigration of people who would change their concept of the United States as they saw it at the time. Can you imagine them advocating return of the exiled Tories and millions of their likeminded brethren, and returning to England their hard fought prize?

The 14th Amendment is not absolute. There are exceptions to it in the case of diplomatic personnel and their families. For example, a child of a diplomat is not entitled to citizenship. Those given diplomatic immunity are not subject to prosecution under State or federal law. These provisions in the law seem to be violate your sense of American values, don't they? It would be easy to extend this concept to illegal aliens who have entered this country contrary to the wishes of the American people as codified in law. Even diplomats have rights, albeit apparently limited ones. We need only extend the level of protection due diplomats to illegal aliens, except for prosecution under our laws and still remain within moral bounds. That's one reason I support a change denying citizenship to the children of illegl aliens.

"This idiot law, if not declared unconstitutional, would arguably render any of the children it covers immune from any action except deportation, no matter how great the crimes they may commit."

Your rational for this lacks common sense, as few children commit crimes, and when they do they are not often prosecuted, but given remedial treatment. It seems to me to be perfect sense to deport them to their homeland where thay can do us no harm. That should be sufficient punishment in itself.

This is a troll, right?

A spelling flame, the misunderstanding of the Constitution's precise function to preclude U.S. citizens from enacting any old law they might want and the inability to understand that children may grow up is just too stereotypical mouth-breather to be real.

It's all moot anyway. This law now has zero chance of passage and the idiot who proposed it, J.D. Hayworth, was defeated.

Fortunately, there are enough people left who are true patriots and will vote to support the Constitution instead of trying to undermine it.

Plyler v. Doe was a bad ruling, and you are unable to defend it, as evidenced by your failure to respond. As to your "mouth-breather characterization", ad hominum attacks are last defense of those whose arguments have no merit, and you make liberal use of them.

"....Constitution's precise function to preclude U.S. citizens from enacting any old law they might want....

Actually, the states may write any law they wish, as long it withstands Constitutional test. The Constitution was not written to assure uniformity of law across state lines. A general review of state law will disabuse you of that ignorant idea.

The existence of true patriots should not be taken for granted, as nothing in the Constitution provides for the perpetuation of patriotism.

Open borders can result in an influx of large numbers of those with religious or cultural beliefs that conflict with the Constitution as currently written. Just because democratic electoral process is followed doesn't mean that a U.S. type constitutional democracy will be the outcome. Witness the democratically elected government of Iraq and its constitution, and Lebanon, hardly mirror images of ours. The Israelis recognize this and are careful as to how much influence Arabs have in their country. We must be scrupulous in establishing good immigration policy, since the Constitution is subject to change at the will of the people by vote, it would only take numbers sufficient to make that happen to destroy what our forefathers envisioned. It is for this reason that the citizen shouldn't take the responsibility of his stewardsip of the Constitution lightly. The Constitution was primarily written for the citizens who are here, and not foreign nationals.

It is only by way of Emma Lazarus poem that we're lead to believe that our country was established to "Give me your tired, your poor Your huddled masses yearning to breathe free ..." etc, etc. Such sentiment has never been official government policy, for pragmatic reasons. If this reality differs from your naieve idyllic principles, then so be it.

Yes, the spelling flame was meant to piss you off. Your arrogance and insulting manner warrants such treatment.

In defense of my my friend, I must point out that the Supreme Court in Plyler v. Doe in effect declared that children have a civil right to an education in face of the bold fact that the Constitution never makes that assertion. The Court annointed itself law giver, declared education a right for the purposes of immigration status and invoked the Equal Protection Clause. Plyler v. Doe would never stand Court scrutiny today and only a lack of will on the part of the Court to re-hear the case prevents if from being overturned.

I need not waste my time trying to educate anyone so resistant to the idea.

As to the whine about ad hominem, I'd be more concerned if it wasn't emanating from the vicinity of the person who started off referring to a distinguished professor of law as "This guy [who] is full of sanctimonious crap." You reap what you sow.

Now buzz off. Any future comments of yours will be unceremoniously dumped for the environmental health of the web.