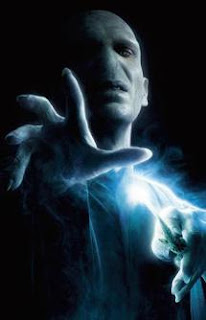 Having polished off God, has Richard Dawkins decided to go after a much tougher opponent?

I would like to know whether there's any evidence that bringing children up to believe in spells and wizards and magic wands and things turning into other things — it is unscientific, I think it's antiscientific. Whether that has a pernicious effect, I don't know.

Finally! Dawkins and conservative Christians, who have long campaigned against the evils of Harry Potter, with no noticeable effect, I might add, may have a common cause.

On a more serious note, I find this highly problematic:

Speaking recently at a conference of the Council of Ex-Muslims of Britain, a group of Britons who have renounced Islam, Prof Dawkins said: "Do not ever call a child a Muslim child or a Christian child – that is a form of child abuse because a young child is too young to know what its views are about the cosmos or morality.

"It is evil to describe a child as a Muslim child or a Christian child. I think labelling children is child abuse and I think there is a very heavy issue, for example, about teaching about hell and torturing their minds with hell.

But is teaching children that there is nothing but an existential void, even if true, any less terrifying? After all, on an evolutionary account of religion, the very reason a belief in an afterlife arose was the result of the survival instinct and the intrinsic fear we have of our own extinction. Would exposing children to that terror, before they have the intellectual and emotional equipment to even have a chance to deal with it, be any less abusive?

Worse, from my perspective as a lawyer, is the devaluation of the term "child abuse." Child abuse is a crime, for which the state has the right to punish parents, and others in loco parentis, most severely and for which the state can, and should, remove children from parental custody.

If, in fact, teaching children about a concept of hell (while also teaching them there is a way to escape such a fate) is "worse than physical child abuse," then where is the campaign to remove children from such an environment and punish the parents? If Dawkins is not willing to start such a campaign, then the use of the term is mere rhetoric.

But it is rhetoric with potentially tragic results.

The vast majority of Americans are religious. Even in the more secular states of Europe, I think it likely that the majority of the populace would find the notion that teaching children about hell, at least unaccompanied by actual attempts to terrify, is the moral and legal equivalent of physical abuse to be, at the very least, an overstatement.

The danger is, if the secular community becomes perceived as having a hysterical view that religion equals child abuse, local prosecutors, who are political animals, could be more reluctant to investigate and prosecute true cases of abuse that fly under the banner of religious belief. Of course, it can be objected that prosecutors tend not to do that now. But the danger resides in the marginal difference. If one child dies because one prosecutor, somewhere, is reluctant to become identified with an anti-religious viewpoint and fails to investigate what looks, at the time, like a borderline case, is that worth the satisfaction of delivering some rhetorical flourish?

Dawkins is certainly articulate and can make his case against religion clearly and forcefully without co-opting this legal terminology. I think he should.
.
Link - Posted by John Pieret @ 9:11 AM

Comments:
I think Dawkins may going off the deep end on this one. I've read a great deal of science fiction and fantasy in my youth, and even in my adult life (Potter included - and I loved them all). They are creative and stimulate the imagination in ways that nothing else can - and that alone may have many positive effects on a developing mind. Are they unscientific? Of course, but if anything, they helped me to distinguish between fiction and reality. When reading them, I am completely immersed in the artificial worlds they create. Some can be immensely enjoyable and thought-provoking. But When I finish a fantasy or sci-fi book, I put it down and forgot it. I know fantasy when I see it. Religious fundamentalists, on the other hand, read only one single fantasy book and base their entire lives around it. Perhaps that's because they have no experience with fantasy, and are more susceptible. Religious leaders like Falwell have attacked sci-fi and fantasy as being anti-biblical and morally destructive.

Is fantasy escapism? Absolutely, but so is just about everything. Eventually we all will die, and none of this science stuff will mean much of anything to us. I say if you enjoy it, then read it!

And it's not only escapism. Homer's Iliad and Odyssey, Shakespeare's Macbeth and Hamlet, Dante's Divine Comedy and many other great works of literature have magical, religious and fantastic elements. But without such works the human race would be very much the poorer.

To be fair, Dawkins was not suggesting that non-realist literature was harmful, he was just asking the question. However, I can't help but think that the question betrays a certain myopia.

Well, from what I can tell on his site, he would like to see studies done. Perhaps he sees fantasy as a form of child abuse, comparable to the hell metaphor. Oddly enough, he's doesn't seem to be questioning sci-fi in the same way as fantasy, which is strange - I see fantastical elements in most sci-fi. I suspect that it does betray a certain mypopia or scientism, especially if he feels that symbolic-rich literature like aesops fables, anderson, tolkien, shakespeare, etc should be off-limits to children.