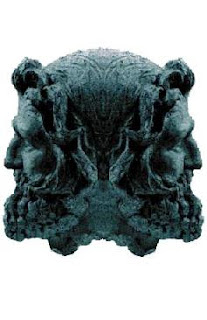 Here we go again with more evidence of what is in store for Texas children if the creationist wing(nuts) of the State Board of Education get their way. Ken Mercer is a member of the SBOE and here is what he thinks the "weaknesses" of evolutionary theory are:

The controversial "macro" evolution was commonly understood as those major changes that could occur if one species jumped to another. For example, have you ever seen a dog-cat, or a cat-rat?

That's right, the old "if evolution is true we should see present-day mosaics made up of random parts of animals slapped together" argument that does nothing but show that the speaker is totally ignorant of what evolutionary theory is.

Then there is Haeckel's embryo drawings and Piltdown man (the latter is a Google cache link while the Talk Origins Archive is down).

There are misrepresentations aplenty as well. Not only are the above phoney "weaknesses" but Mercer misrepresents what the scientists were saying when they testified that they were no weaknesses in evolution. The most that those examples would represent, even if they were fair criticisms, are errors of fact or the present absence of evidence that would be overwhelming outweighed by the other evidence for evolution that Mercer is ignorant of and wants to keep the students in his charge ignorant of. And I doubt very much that anyone said that "students are "'unqualified' to ask questions." What was almost certainly said was that high schoolers and below have neither the information nor the maturity to follow the highly complex issues that are the real controversies in evolutionary theory. And there is this:

They [the scientific witness] argued that allowing discussion of weaknesses would lead to teaching religion and subsequent litigation.

The fact is Texas has allowed teaching scientific weaknesses in science textbooks for the last 20 years. In that period of time, not one lawsuit was filed; and for the record, the teaching of creationism and intelligent design is not found in any current textbook adopted by the State of Texas.

But as Don McLeroy, the creationist Chairman of the SBOE, himself discussed, it wasn't for lack of trying:

Back in November 2003, we finished about four or five months of adoption process for the high school biology textbooks in Texas. ...

But I want to tell you all the arguments made by all the intelligent design group, all the creationist intelligent design people, I can guarantee the other side heard exactly nothing. They did not hear one single fact, they were not swayed by one argument. It was just amazing. I mean all the, my fellow board members who were really not even the scientists in the group, they were not impressed by any of this. They said, "Oh well, it's just two opinions. And there were only the four really conservative, orthodox Christians on the board were the only ones who were willing to stand up to the textbooks and say that they don't present the weaknesses of evolution.

Since creationism has no positive scientific evidence, teaching the tired old canards against evolution that it is exclusively comprised of is the same thing as teaching creationism. In any event, as so often seems the case, the proponents of the "teach the weaknesses" cannot help but reveal the real motivation behind the ploy. As noted above, it's "macroevolution" that they find controversial.

Most people of faith agree with what is commonly referred to as "micro" evolution," small changes that are clearly visible.

So it is the same "people of faith" who are pushing the "weaknesses" ploy because they don't like the idea of common descent.

I shouldn't be surprised at the duplicity ... it's just that you'd think they'd be better at it, given all the practice they've had.

Update: Wes Elsberry at The Austringer has done a thorough job of demonstrating Mercer's misunderstanding of science in general and evolution in particular and his reliance on what Wes mercifully terms "old school creationism" (blithering idiocy is more like it).
.
Link - Posted by John Pieret @ 12:08 AM

Quite true. But there seems to be a strong correlation between blithering idiocy in elected officials and unconstitutional actions by governments.