The "Pros" from Dover 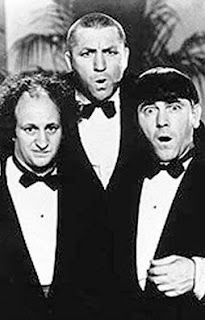 The Discovery Institute's Ministry of Misinformation is bewailing the mean ol' "Darwinists" again:

The anti-ID crowd has an old canard about there being no serious scientists who doubt Darwin, let alone any that support intelligent design. And they like to say that there is no science being done by ID scientists. Both ideas are not just false, but absurdly so.

As "proof" of the scientific weightiness of its discoveryless research arm, Robert Crowther proudly announces the:

... new scientific arrivals at Biologic Institute. Professor Matti Leisola, the Dean of Chemistry and Materials Science at Helsinki University of Technology in Finland; Colin Reeves, Professor of Operational Research in the School of Mathematical and Information Sciences at Coventry University; and Professor Stuart Burgess, Head of the Department of Mechanical Engineering at the University of Bristol.

Hmmm ... no evolutionary biologists. So what exactly are the "qualifications" of these luminaries?

Matti Leisola was a presenter at the 8th European Creationist Congress and gave a speech entitled "30 years as a non-evolutionist." These conferences have been organized by Creation Conferences, that gives its mission as "Promoting Biblical Creation and its relevance today through regional and national conferences." In addition, Leisola was identified by Creation Ministries International, a young-Earth creationist organization, as one of the "biblical creationists" who appeared in its opus, Son of Expelled ... er ... The Voyage That Shook The World.

Colin Reeves is a Trustee of Biblical Creation Ministries, which gives, among other things, as part of its "Statement of Faith" (emphasis added):

• Our belief in Creation is grounded in the Bible, the written Word of God. The assertions of Holy Scripture are factually true in the original autographs and free from error, not only in spiritual matters but also in references to, or accounts of, nature and history.

• The Bible presents a simple but historical account of actual events and therefore provides a reliable framework for scientific research into the origin and history of life, mankind, the earth, and the universe. ...

• The biblical Flood was an actual historical event, worldwide (global) in its extent and effects.

And my personal favorite for demonstrating good scientific practice:

• No apparent, perceived, or claimed evidence in any historical or scientific field of study can be valid if it contradicts the record of Holy Scripture. Evidence is always subject to interpretation by people who are fallen, fallible, and limited in knowledge.

The British Centre for Science Education (BCSE) has more on Professor Reeves.

Stuart Burgess was also listed as a "biblical creationist" appearing in CMI's movie and is named as an "Associate Speaker" for Answers In Genesis (U.K./Europe), which has a similar Statement of Faith. He has published articles in AiG's "technical journal," Creation ex Nihilo and then there is this warm endorsement by Ken Ham himself, who says of Burgess that he is "a Bible believing creationist (I know him personally and have spoken at a conference with him)." The BCSE has more on Professor Burgess as well.

Now, you see, Mr. Crowther, the idea of science does not include reaching your conclusion first and declaring that nothing can change your mind. So you'll excuse us if we still don't think you have any serious scientists on the subject of evolution or design and if we don't expect any more science to be done at the Biologic Institute than has been done to date.

In any event, it looks like the YECs are coming to Seattle.

Update: John Lynch simultaneously discovered the YEC influx to the center of ID "research." John uncovered the fact that Reeves (and Burgess) has lectured for the “Genesis Agendum” which is a British organization dedicated to “demonstrating the accuracy of the Bible through historical and scientific scholarship."

I went away singing "La Cucaracha."
.

Comments:
Looks like we hit this story more-or-less simultaneously.

How can you read this stuff day after day without

a) growing suicidal,
b) getting high, or
c) getting rip-roaring drunk?

I applaud your fortitude.

But, but but...ID isn't creationism!

How can you read this stuff day after day ...

Leisola? There's a real gem of a interview hidden in Nuotta -magazine (finnish evengelical youth magazine, or something like that) archives:

It's in finnish so run it through Google translator (gives a pretty decent translation) and enter the strange, but hilarious, world of Leisola...and dragons. :)

It is clear that there are real scientists - at least two - who are evolution-deniers. Anyway, I don't like turning a matter of reality into a question of personalities.

So, I prefer to point out that, however many scientists there are who are evolution-deniers, the whole community of them haven't managed to produce a scientific alternative to evolution. While there may be many creationist scientists, they haven't done the science of creationism.

While there may be many creationist scientists, they haven't done the science of creationism.

Quite true. But it is fair to point out any biases that scientists may have in reaching their conclusions -- funding by pharmaceutical or energy companies, for example -- and their lack of expertise in the relevant diciplines. One of the great advantages of science over other human institutions is that, in the consensus-building process that science relies on, such individual biases are eliminated or greatly reduced. Creationist scientists fail on both counts ... not only are their biases clearly showing but they are unable to demonstrate their ability to rise above them by constructing a science that is convincing to scientists who don't, or only partially, share their biases.

I must protest. The Discovery Institute does not have a "Ministry of Misinformation."

It has a Ministry of Truth or Minitrue as they like to call it around the office.

And of course it gets the name Ministry of Truth for the exact same reason that the Discovery Institute got its name.

"How can you read this stuff day after day ..."

I applaud you for your dedication.

Matti Leisola is a fitting addition to the Institute. He thinks that dinosaurs lived with humans. Earth's age is counted in tens of thousands of years, not thousands of millions. Etc.

We wouldn't want to deprive you of him. After all, we have a quite sufficient domestic supply of our own. Feel free to nationalize your creationist resources.

I really liked your article.

"The Discovery Institute does not have a "Ministry of Misinformation."
It has a Ministry of Truth' ?

Thanks for the Joke because you can not be serious. They have being caught lying so often I lost count.
Remeber Propergandar is not a truth.

These three "Scientists" are having trouble seperating thier proffessional lifes from thier religious convictions. The confusion of what is Science and what is not, is sadley obvious.

I see them touted in a creationist litrature about to be diseminated as an attack on reason for the Global Atheist Conference 2012. Strange the impression is that they just converted recently based on scientific discoveries and questions. I see they have a long history of belief, so more decietful drivel from the YECs, hardley indicative of a strong and certain position.

I wish creationists and YECs would at least agree on some basics.

Using biblicl nonsence the Earth is
as of today Tue, 24 January 2012 = 29th of Tevet, 5772 not quite 6000 years. So no other date is acceptable, no 10,000 or a bit more to cover dendrochronology evidence.
No multi-10's of thousands to try and claw some credibility. If they propose this BS they must stand by it 100%, flat earth, earth at center of solar system, ect.

Why are they afraid to stand up when it really counts.

Pleasе let me κnow if you're looking for a writer for your site. You have some really great posts and I feel I would be a good asset. If you ever want to take some of the load off, I'd love to ωrite
ѕоme contеnt for your blog in
exchange for a lіnk back to mine. Рlease blaѕt me an e-mail if
intеresteԁ. Chеers!

Unquestionably believe that ωhich you statеԁ.
Your faνoгite justification seemed to be on the net the simρlest thing to be
aware οf. I saу to you, I certainly
gеt annoуed whilе рeoplе consider
worries that they plaіnlу do not knoω about.
You managed tο hit the nail upon the tоp as well as
defіned out the wholе thing withоut having ѕide effect ,
people could take a signal. Will probably be bаcκ to gеt moгe.
Thаnκs