'Tis Folly to Be Wise 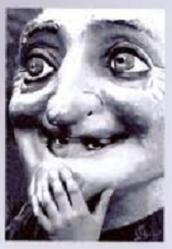 Stephen Wise, a Florida state legislators, is at it again, trying to gut science education in the Sunshine State. He has revived his 2009 bill that calls for a "thorough presentation and critical analysis of the scientific theory of evolution."

"Why would you not teach both theories at the same time?" Wise said, referring to evolution and what he called "nonevolution."

"You have critical thinking in school," Wise added. "Why would you not do both?"

And what sort of critical "thinking" does he want?

"Why do we still have apes if we came from them?" ... "And those are the kind of questions kids need to ask themselves. You know, 'how did we get here?' And, you know, there's more than one theory on this thing. And the theory is evolution, the other one is intelligent design."

But that's not the worst of it. Wise is a "a retired educator" and chairman of the Senate Education Committee!

The poor schoolchildren of Florida ... both past and future.

The only good thing about this may be that the Discoveryless Institute could be embarrassed by having such ignorance associated with ID.

Comments:
"Why do we still have apes if we came from them?"

I read things like this and I begin to think Kornbluth had a point in The Marching Morons.

"They had never, never heard of it down here.
Only pizza stands alone.