.
This little item passed under my radar, at least. It seems that a public high school in Ohio was, until recently, opening the school day with a recitation of the Lord's Prayer over the public address system. The practice only stopped when a local newspaper got wind of it and questioned school district officials about whether it was a violation of the Establishment clause of the Constitution.

Superintendent Mike Hanshaw says none of the 300 students at Mineral Ridge High School was required to say the prayer -- and none had complained.

It makes you wonder if the Mineral Ridge civics course taught that robbery is only wrong if you get caught.
More frightening still is the response from a Florida-based outfit calling itself "Liberty Counsel," which makes the Thomas More Legal Center, that helped set the Dover School District back a cool million bucks, look like positively responsible advisors. The president and general counsel of Liberty Counsel, Mat Staver, says he believes that there is a distinction between what the Supreme Court has said on the issue of separation of church and state and what the U.S. Constitution actually means. Maybe we should have a term for advice like that. "Doing a Dover" sounds about right.

The attorney acknowledges that under the current interpretation of the U.S. Supreme Court ruling, the practice of reciting the Lord's Prayer over the intercom likely is unconstitutional. "[But] on the other hand," he adds, "that's clearly not the intent or purpose of the Constitution itself."

While Staver goes on to make the reasonable observations that moments of silence at the start of the school day or students praying together in Bible clubs meet Constitutional muster, you have to ask yourself if some school district out there is going to wind up paying a whole lot of money because of advice they get from Liberty Counsel. Would you trust your Constitution to this man? 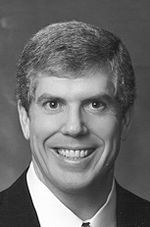 Comments:
My college roommate, later a Harvard law grad, told me long ago that "the Constitution means what five Supreme Court Justices say it means."

That is essentially correct. Laws, including the Constitution, are nothing more than the rules that are enforced by society at any one time. They are always the result of multiple interests pushing up against each other, both as they are being drafted and when they are put into effect. As such, there is no objective standard as to which interpretation is the "correct" one, since each group saw the text differently when the laws were written and see it differently when they are being enforced.

People who tell you that there is one "true" interpretation of the Constitution will probably be rigid (and wrong) in all the rest of their thinking.

wow. i can't believe i stumbled upon this. i graduated from mineral ridge high in '05 and the prayer was always said in the morning. nobody was ever required to say it and nobody cared either way until it was brought to the public's attention. then all of the students started complaining about how they wanted it and how some didn't and everything. but when nobody cared that was just it...nobody cared.