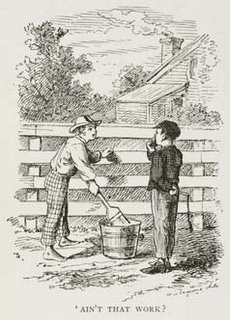 Okay, this story has a certain charm as well as being potentially important to science education in America.

Tom Sawyer may run for the Ohio State Board of Education.

No, not that Tom Sawyer. This Tom Sawyer was formerly the mayor of Akron and an eight term congressman. He is being courted by the scientific community in Ohio to oppose an incumbent who has been a leader in the "critical analysis" scam against the proper teaching of evolutionary theory in Ohio public schools.

Tom Sawyer's potential opponent isn't Injun Joe, though ... her name, which would have probably tickled Twain, is Deborah Owens Fink. Fink is a University of Akron marketing professor. A supporter of hers expressed surprise that Sawyer was being asked to run.

"The board got rid of the language back in February, so I'm not sure why the Democrats are that anxious to replace Deb," said [chemist Robert] Lattimer, who served on the writing team that wrote the science standards.

However, it has apparently escaped Lattimer's notice that "[i]n July, a version of the disputed language resurfaced and is expected to be debated at next month's board meeting." The election may come too late for that, but the continuing effort to inject creationism into the state's public schools is more than enough reason for the scientific community and anyone else interested in the good education of America's future leaders to seek to oust those who would use taxpayer money to advance sectarian causes.

Comments:
It could function as an exceptional advertising device that could act as a magnetic to entice the fantastic chances in terms of fans, customers, consumers and also various other networking probabilities. buy usa facebook fans