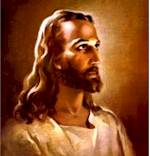 I've posted twice before, here and here, about the Harrison County West Virginia Board of Education being sued for the display of a reproduction of a rather smarmy painting of Jesus that is hanging outside the Principal's Office at the district's Bridgeport High School. It seems that the local community has raised $150,000 that they can't think of better things to do with than to throw it down a legal rathole. With that and the promise of free representation by one of "eight national groups with expertise in constitutional law that have offered legal help," the school board has decided to fight the suit by Americans United for Separation of Church and State and the West Virginia American Civil Liberties Union.
Ignoring the ancient maxim that legal advice is worth exactly what you pay for it and the example of the Dover School Board, it is still hard to see how this can end any way but badly for the school and the children, unless they luck out and the religious right finally runs across a real "activist judge" who will overturn at least 65 years of Supreme Court precedent to rule in the board's favor.
It seems this is a bit of community chest-thumping more than a well-thought-out skirmish in the cultural wars. As the euphoniously named Mayf Nutter put it:

I feel proud to be a West Virginian and an American today because of what these people did here. They said they would not be pushed off their own porch.

The ACLU is saying they have the right to come in and find a few people who disagree with the majority and use them to overtake the majority. All we're saying is, 'not without a fight.'

A tip o' the hat to Ed Brayton at Dispatches from the Culture Wars for this.
.