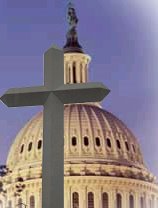 I've linked before to articles about Michelle Goldberg's new book, Kingdom Coming: The Rise of Christian Nationalism. I've read it now and it is every bit as scary as I expected and more. I'm going to give some excerpts from time to time as a warning as to what everyone who thinks the Enlightenment was a good idea is up against. The following is an excellent one to start with:
Goldberg discusses at length the "faith-based" social programs (that she rightly dubs "The Faith-Based Gravy Train") set up through executive fiat by the Bush Administration. These range from local drug addiction programs to funding for large-scale charities such as the Salvation Army where, unlike prior practice, requirements that publicly-financed programs not discriminate in hiring by religion or sexual orientation have been removed. Also missing is any requirement that the programs funded by these executive orders establish that they are effective. While Goldberg says this is partly due to administration indifference:

During a presentation on the effectiveness of faith-based providers, Gerard Bradley, a professor at Notre Dame Law School who chaired the Federalist Society's Religious Liberties Practice Group, seemed to concede that what data exists doesn't particularly help their case. "It seems to me that when we're talking about what works, what's effective, what are the numbers, we're talking about objective or even secular outcomes:' Bradley said. Then he added, "It may turn out that the numbers are a wash."

Instead, he argued for a different kind of measurement, one that considered the benefits of conversion. "God does work in the world:' he said, and people "who welcome Jesus into their hearts" will be better off. Most research can't measure that, he said, because most social scientists don't entertain the idea that "grace makes the difference:' not "some secular variable."

To the Christian nationalists, then, publicly funded religious social services auger nothing less than an epistemological revolution. They allow knowledge derived from the Bible to trump knowledge derived from studying the world. No longer would American domestic policy and American civic life be based on facts available to all of us, on the kind of rationality that looks at "objective or even secular outcomes."

It would be based on faith.

Not to put too fine a point on it, these people are arguing (at least when the general public isn't listening in) that because they think that being their kind of believer is good for you, they can take your tax money to try to convert you ... for your own good, of course. They are, in their own minds, official United States Government Missionaries.
Be afraid . . . be very afraid . . .
Link - Posted by John Pieret @ 4:03 PM