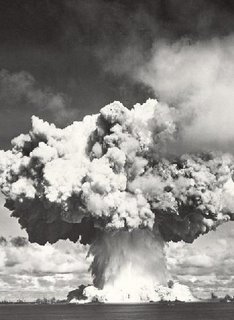 The Kansas City Jewish Chronicle has an article about Michelle Goldberg, who authored the recent book, Kingdom Coming, about Christian Nationalists, that I have written about a number of times before.
While noting that there is something of a backlash against the religious right, as demonstrated by a number of moderate Republicans defecting to run as Democrats in Kansas, Goldberg does not think there is likely to be any lasting change:

[T]he underlying social dynamics are not going away. Mega churches that serve as the kind of central community spaces, in places where they don't have any kind of public infrastructure, are not going away. Something like 97 of the 100 fastest growing counties of America went for Bush in 2004, and in those counties those cultures are stronger. This movement is not a majority of Americans, or even evangelicals. It's 10 to 15 percent of the population. They are not a juggernaut, and it's not inevitable. But a single election won't make it go away. They'll regroup.

Perhaps more interesting, however, is that:

[G]rowing numbers [of American Jews] are finding themselves making common cause with evangelicals in support of Israel ...
Since her book came out in May, Goldberg said, she has met "Jewish leaders who say 'What do we care what they think? It's a useful alliance.' Leon Wieseltier had the best quote on that when he called it 'a grim comedy of mutual condescension.' This is a movement whose ultimate goals involve a third world war in the Middle East."

Support Armageddon. It's the last aid Israel will ever need.
Link - Posted by John Pieret @ 10:31 PM