The Night They Drove Ol' Dixie ... 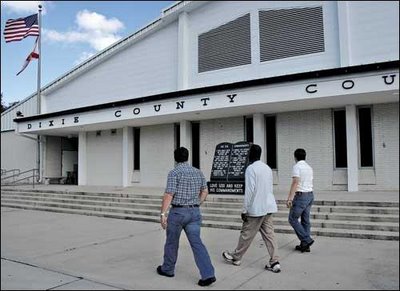 The commissioners of Dixie County Florida endorsed the erection by a group of private citizens of a black granite, 12,000 pound monument displaying the 10 Commandments with the admonition to "Love God and keep his commandments" on the county courthouse steps.

In no surprise whatsoever, the ACLU is already circling:

Brandon Hensler, director of communications for the American Civil Liberties Union of Florida said, "There are certainly values in the Ten Commandments that are enshrined in the law and should be upheld, like 'Thou shalt not murder.' "

But he continued, "If there are residents of Dixie County who understand our country's constitutional values and that it is the role of churches - not of government - to urge people to love God and keep his commandments, we would be interested in speaking with them."

On the other side stands former county attorney Joey Lander, who told the board he would defend any lawsuits stemming from the decision for free before his resignation from the post. He has since promised to abide by his offer but isn't exactly waiving any gauntlets around: "I will gladly represent them for free but I wouldn't want to challenge someone to file a lawsuit."

A couple of articles about this story have mentioned the Supreme Court case of Van Orden v. Perry, where the Justices allowed a 10 Commandments monument to remain on the Texas Capitol grounds by a 5 to 4 vote. First of all, unlike the Dixie case, there were 16 other monuments and 21 historical markers, diluting its impact as an endorsement of a religious view. More importantly, as Justice Rehnquist wrote for the majority:

The folks in Dixie just couldn't be content with the 10 Commandments as a symbol of law giving. They had to add that "Love God and keep his commandments." Short of a complete gutting of the Establishment clause by the changed Court (that I tend to doubt will happen no matter how much Scalia and Thomas want it) this monument is doomed and the county faces paying the ACLU's legal fees.

Comments:
Stupid is as stupid does.