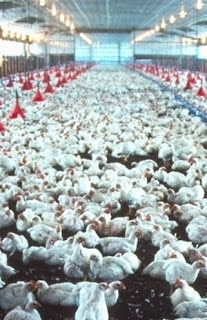 There is this story about how the Indonesian Ministry of Health has refused to provide samples of the H5N1 "bird flu" virus to the World Health Organization until it receives assurance that it will have access to pandemic vaccines.

Since then, a WHO official said Tuesday, the organization's international network of collaborating laboratories at the Centers for Disease Control and Prevention in Atlanta and three other cities has not been able to obtain samples of the virus from Indonesia, the country hardest hit by bird flu, with 81 laboratory-confirmed cases and 63 deaths.

The reason for this is that Indonesia is afraid that the virus samples they provide to the WHO will be used to make vaccines that are too expensive for their citizens to buy. They have no little cause for concern:

The entire world manufacturing capacity for influenza vaccine is sufficient to immunize only 500 million people, and perhaps only half that if more than one dose is required.
Most vaccine for H5N1 has been sold to developed countries before it is produced - or even completes clinical trials - to be stockpiled in case of a pandemic.
Indonesian Health Minister Siti Fadilah Supari has been quoted in press accounts as saying her government wants to "create a balance between developed and developing countries in facing catastrophe."
.
"The WHO has been siding with capital owners, which sometimes forget the good of the people," she said. "We want to change that."

As the British magazine New Scientist has said:

In a fair world, Indonesia would send its virus to the best labs and share in any vaccine made from it. In our world, Indonesia sends off its virus, companies make vaccine from it and sell it to countries that can pay. Indonesia is not one of them, and neither are the other countries suffering badly from H5N1.

But why is the WHO worried at all? Why all the interest, even angst, over a vaccine? After all, bird flu is a rather difficult disease for humans to get, requiring intimate contact with birds that is not common in developed countries. Even in a nation like Indonesia, with over 32 million families in a vast archipelago raising chickens in their backyard, there has been only 81 cases and 63 deaths. Worldwide, only 278 people have gotten the disease with 168 deaths. So why are vaccines selling out before they are even made?

Without the samples, flu experts are unable to track changes that are building up in the genes of H5N1, the influenza virus health experts fear could evolve into a human strain and cause a pandemic.

But that eminent doctor and Paleyist theorist, Michael Egnor, has assured us that medicine does not need to understand evolution to deal with such things as bacterial resistance "strategies." Doesn't that go as well for the "strategies" viruses use to change their infection vectors so as to make them more infectious to humans? Why are so many doctors at the WHO and the CDC so worried about this, since an understanding of evolution isn't needed for medicine?
For the record, on the issue of Indonesia sharing viral samples, I agree with the following:

Maurice Middleberg(cq), a vice president of the Global Health Council, a group that advocates efforts to improve the health of people in developing countries, said the practice of sharing virus is essential to confronting the influenza threat - but the needs of developing countries must be considered also.
"The exchange of scientific information is essential to preventing the emergence of a global pandemic, but a way also must be found so that countries that cannot afford vaccine at commercial rates will be able to get it," Middleberg said.

Now, if we can only manage an exchange of scientific information with certain elements within the United States.
.
Link - Posted by John Pieret @ 6:59 PM

I can't undersatand why. I just watched the first hour and it is really, really good!