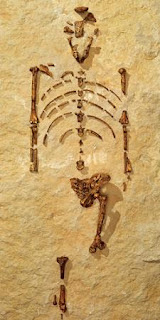 Larry, extracting a measure of revenge (or whatever), has tagged me with this evolution meme whereby you are supposed to pick five posts that show the evolution of your blog from the time it first started until now.

The very first post, on July 24, 2005, was simply a way to put some pictures up on the web about John Wilkins' visit to New York and the "howlerfest" held by a group of talk.origins habitués at the American Museum of Natural History to celebrate the occasion. I had no intention of blogging at the time and, in the only post I did that month not related to the howlerfest (a nifty quote from Darwin on why we don't find "transitional fossils" with, say, half a wing), I said that "blogging is pernicious and deserving of obscurity." Of course, I have never let any such considerations stop me before ... though some may think I should (right, Larry?).

It was wasn't until September of 2005 that I posted again. There was a total of eight posts that month. At first, I envisioned the blog as a place I could store ideas or arguments in a convenient form that could then be pointed to in some other discussion ("Just Not-So Stories" is a good example) and it does retain that function for me still today.

Along about February of 2006, for some reason, it became a point with me to try to get at least one post up a day. Frankly, I haven't a clue why and now it is almost ritual rather than sense. Some days, it shows. Still, I hope that, even when the gruel is thin, there is, at least, a smattering of humor or irony or sarcasm to lend a bit of savor to the dish. It did send me somewhat farther afield than my original concentration on evolution vs. creationism. Inevitably, it led me off into the dark trails of the "New Atheism" debate. An early venture was this one from April of 2006, with a quote from someone you might know:

Secularism does not in any way imply atheism or agnosticism, nor is unbelief a prerequisite for favoring a government that is completely independent of sectarian religion. At the time of the founding of our country, among the most vigorous advocates of the separation of church and state were the Baptists, not the atheists, who were then and have always been a tiny minority. In a country with a plurality of diverse beliefs (and that also has not changed), it makes sense that the government that serves them all should make no commitment to any one brand of religion, and that we should enforce a studied indifference to all forms of the sacred. ...

Along about July of 2006 I began adding "illustrations" to each post, some of which are directly related to the subject, some of which are meant as merely evocative and some of which are visual puns that only I probably get. One early (and pretty) one was of a quilt by a Canadian woman who received a prize for one of her works that poked some fun at the ID debate by showing eight giant Galapagos tortoises one on top of the other with the earth sitting precariously on the back of an orange-shelled one, taken from Bertrand Russell's supposed encounter with the old woman who insisted that the Earth was carried on the back of a giant turtle (when Russell slyly asked what the turtle stood on, the old woman was alleged to have responded that it was "turtles all the way down"). For that affront to the good name of ID, the poor woman was subjected to some of the most ham-fisted "humor" Casey Luskin is capable of ... an astounding capacity, I might add.
. 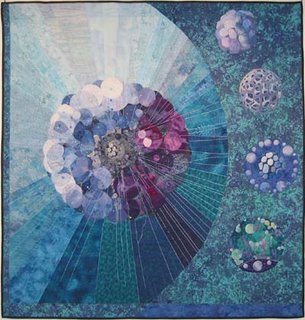 Since that time I have consciously kept the blog the same in appearance. One thing I will never change is the black type, in a nice clean and easy to read font, on a white background. The opinions expressed by those means may, despite the best efforts of the management, be as old-fashioned and stodgy as the typeface.

I'm not going to tag anyone but I'm going to invite Brian Switek at the new digs for his blog Laelaps at ScienceBlogs to play, as a possible way to better introduce himself over there. (And congratulations to Brian again!)
.