Sowing the Seeds of Faith 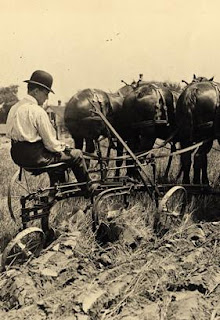 Dr. Michael Egnor, apparently still being stung regularly by Dr. Steven Novella's refutations of his babblings is back turning over all the same old ground with his usual plow: bald assertions, the misrepresentation of the process of science, projection of his own faults onto Dr. Novella and logic so suspect that it is unfair to use the label. He actually reaches comic heights at times, such as in the following:

Dr. Novella is fond of the God of the Gaps sneer, in the form of "Dualism of the Gaps." ...

Dr. Novella is wrong to attribute the inference to dualism to an argument from ignorance. ...

Perhaps it was more understandable several centuries ago for the philosophically naive to hold to a confident assurance that science would ultimately explain the mind purely in terms of the material brain. Neuroscience has rendered that view no longer tenable. The explanatory gap is real, and our evolving knowledge of neuroscience only makes the futility of materialist attempts to close the explanatory gap even more clear. This is not, pace Dr. Novella, infering (sic) a positive conclusion from negative evidence. This is coming to accept the obvious; neuroscience has failed to show how subjective experience arises from objective matter.

That's right! Egnor's not inferring a positive conclusion from negative evidence, its just obvious to him that materialism is wrong because neuroscience can't explain the material basis for subjective experience! It's not an argument from ignorance or dualism in the gaps to appeal to an "explanatory gap" either! It's almost superfluous, after such self-contradiction, to point out that Egnor's claim that it will be futile to attempt to fill that gap is unaccompanied by any explanation of how he knows that scientifically.

It makes you wonder if Egnor can actually hold the idea of what he wants to say for as long as it takes to write it down. Sometimes it almost seems like free association.

There is oh so much more wrong with Egnor's screed but there is only so much of the cocktail of two parts ignorance and one part undeserved confidence with a dash of ego that one should imbibe before driving.
.
Link - Posted by John Pieret @ 4:59 PM

Comments:
Egnor reminds me of that IDiot that used to post on t.o back in '01-'02. (might still be active). Had a medical degree, so he thought it granted him expertise in every field outside of his own. Start a thread, everyone would pile on refuting his arguments, then he would be back a week or two later with exactly the same train of thought.

I suppose it is something of an occupational hazzard for doctors, especially surgeons, what with spending so much time explaining life and death decisions to people who usually take their word for law, that they would come to think that they only have to find the right words and people will agree. Add to that the kind of personality that has the supreme confidence it takes to cut into a human brain and you get this kind of repetitious assertion coupled with annoyance at anyone having the termerity to question his opinions or to point out that those opinions aren't fact.