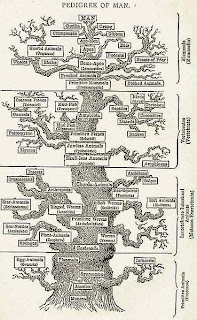 Drat those high-salaried college professors, living in the lap of luxury with their trophy wives, dripping with leisure time to idly peruse the internet and write extended critiques of whatever catches their fancy. I had started to write a scathing commentary on a piece that appeared in this morning's New York Times Science section, entitled "Darwinism Must Die So That Evolution May Live," by Carl Safina. But then I had to trudge off to the shyster mines and toil unrelentedly to earn my meager daily bread by the sweat of my brain. In waltzed PZ Myearshertz and stole my subject. Oh well, Mxyzptlk had slightly different zebrafish to fry and so I'll sweep up the few crumbs he let fall from his opulent repast to take back to my intellectual hovel for my poor evening meal.

Safina, as a MacArthur fellow, adjunct professor at Stony Brook University and the president of the Blue Ocean Institute, is doubtless a bright guy. But at least some of what he says in the essay is flat out wrong. First of all, his main proposition is at least half in doubt:

By propounding "Darwinism," even scientists and science writers perpetuate an impression that evolution is about one man, one book, one "theory." The ninth-century Buddhist master Lin Chi said, "If you meet the Buddha on the road, kill him." The point is that making a master teacher into a sacred fetish misses the essence of his teaching. So let us now kill Darwin.

But what scientist "propounds" the notion that evolution is about one man, one book or one theory? PZ swats this one easily:

... Safina charges off into ridiculous hyperbole, that scientists are making Darwin into a "sacred fetish", and creating a "cult of Darwinism". It's simply not true. I go through this every year, when I'm off to give a talks about Darwin around the time of Darwin Day, and there's no deification going on anywhere. I talk about the central principles of Darwinism, which are still valid, but I also point out that he got many things wrong (genetics is the most vivid example), and that the science has advanced significantly since his day. I've talked to many other scientists who do the same sorts of lectures, and nobody portrays him as Saint Darwin.

Safina goes on to say:

Using phrases like "Darwinian selection" or "Darwinian evolution" implies there must be another kind of evolution at work, a process that can be described with another adjective. For instance, "Newtonian physics" distinguishes the mechanical physics Newton explored from subatomic quantum physics. So "Darwinian evolution" raises a question: What's the other evolution?

Whether or not it is ultimately fair to Darwin, those terms have come to mean something like "evolution depending on selection." The other type of evolution at work would be that which is not driven by selection, such as evolution by genetic drift. Safina seems to either be unaware of the usage or is assuming all evolution is driven by selection. If the latter, he can go to Larry Moran for an earful about that.

Science writers are a different matter altogether, however. But why should Darwin suffer for their sins? Wouldn't the more efficacious solution be to kill all the science writers? It would at least make a refreshing change from lawyers.

Most egregious to my mind though, is Safina's dismissal of Darwin's originality. He drags out many of the old canards that can be summarized under the notion that "evolution was in the air" of Victorian society and Darwin was just the person who plucked it out and wrote it down:

Thinking about farmers' selective breeding, considering the high mortality of seeds and wild animals, he surmised that natural conditions acted as a filter determining which individuals survived to breed more individuals like themselves. He called this filter "natural selection." What Darwin had to say about evolution basically begins and ends right there. Darwin took the tiniest step beyond common knowledge. ...

... Alfred Russel Wallace wrote to him from Southeast Asia, independently outlining the same idea. Fearing a scoop, Darwin's colleagues arranged a public presentation crediting both men. It was an idea whose time had come, with or without Darwin. ...

PZ correctly excoriates the idea but perhaps not in the right way:

There is a strange historical industry dedicated to finding omens and portents in other people's writings that preceded Darwin, and it is entirely true that ideas like the transmutation of species were bubbling up all over the place in pre-Darwinian Europe. ... But he still deserves full credit. Darwin is the man who realized the grand import of the idea; this was no casual mention of an interesting possibility, but a profound recognition that his explanation for the origin of species was going to have a sweeping effect on science and society, and a determination that he would document it thoroughly and well. Darwin also explained the concept lucidly, and with volumes of evidence, to such a degree that Thomas Huxley would say "How extremely stupid not to have thought of that!" upon learning about it.

At the moment I'm reading Peter J. Bowler's The Non-Darwinian Revolution that makes a forceful case that Darwin was not just swimming in a sea of evolutionary ideas and happened to hit upon the right local current. In point of fact, the sort of evolution that was in the air at the time harked back to the original meaning of the word "evolution" ... the unfolding of a teleological program moving toward a preordained end, as exemplified by the development of an embryo. What is more, it was another seventy years or so after Darwin before the scientific community caught up.

The "developmental" school of evolution, as Bowler calls it, was progressive and mostly invoked in service of a Divine Plan. This developmental school remained the dominant view among scientists after Darwin, though with its theological aspects played down (but far from absent). It continued in the form of orthogenesis, Haeckel's recapitulation and early "Mendelism," (which saw genes as largely unaffected by the environment), and lasted until the "Modern Neo-Darwinian Synthesis" began to emerge in the 1920s and 30s. In fact, if Bowler is correct, and I think he is, Darwin was a side branch of evolutionary thought for those seventy years -- the man who had made transmutationism respectable, breaking a logjam of reluctance to give up the immutability of species, but whose greatest ideas were honored more in the breach than the observance.

Far from just realizing the grand import of the idea that species change over time, Darwin made such a clean break from the ideas that preceded him that many of the people who called themselves "Darwinists" in the last decades of the 19th Century and the first of the 20th were unable to recognize how different their ideas were from Darwin's. And even Wallace did not originally incorporate natural selection as Darwin saw it. Wallace, in his Ternate paper, saw the struggle for life as a competition by species against hostile environments, not a competition between members of a species. Wallace saw selection as working on well-marked varieties within species rather than on individual organisms, a notion quite different from Darwin's.

Bowler shows that the strange historical industry dedicated to downplaying Darwin's originality that PZ talks about actually has two sources: those who are boosters of science and those who dislike what they see as the materialism of science that they believe arrived with Darwin's theory.

The motivation of the latter group, which includes creationists as well as adherents to Romanticism and Post-Modernism, is fairly obvious. Not liking to think that cold reason trumps their worldviews, they would prefer to see evolution as a political movement. Which movement is not very important and it has been variously attributed to Capitalism, Marxism, Socialism, et al.

But why would some science supporters downplay Darwin's contribution? That arises from their desire to see science as a triumphal progression of nature revealed, following as sturdy a "main branch" as Haeckel had leading to the pinnacle of man. But the history of science is branching, similar to the biological evolution it recounts, and is the result of contingent events and the lives of individuals. Safina is right that there is much danger in hagiography but there is a different, but equally pernicious, hagiography to be had in the notion that our knowledge of the world would end up in the same place no matter who made what discoveries when. If Stephen Jay Gould is right that, if we could "replay the tape of life," we would wind up in a very different place, there is no reason to believe that if we replayed the history of science what we'd wind up with would look very much like what we have now. Darwin should be honored because he really mattered.

But Safina's right about this:

Darwin's intellect, humility ("It is always advisable to perceive clearly our ignorance") and prescience astonish more as scientists clarify, in detail he never imagined, how much he got right.

That sounds like more than enough reason to give the old man one helluva birthday party.
.
Link - Posted by John Pieret @ 9:05 PM

Comments:
Let's see...Safina has a Ph.D. in ecology and has authored many peer-reviewed papers on conservation biology.

I'm afraid you're going to have to kill all the scientists.

Right after the science writers ...

with one or two notable exceptions!

In the first paragraph Safina refers to the "discovery of DNA" when I think he must be referring to the discovery of the structure of DNA. Don't ya think?

Yes. The existence of DNA was known well before it's structure was known. It was suspected to be the carrier of heredity but no one knew the "mechanism" or could read "evolutionary lineages" before the structure was worked out.