Of Birds and Brains 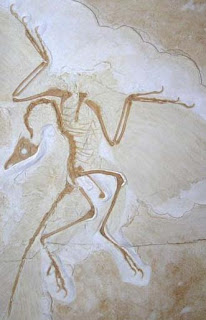 Oh, look! Ray Comfort is educable. In an article in WingNutDaily he responds to PZ Myers' criticism of Comfort's "argument" that:

Every male dog, cat, horse, elephant, giraffe, fish and bird had to have coincidentally evolved with a female alongside it (over billions of years) with fully evolved compatible reproductive parts and a desire to mate, otherwise the species couldn't keep going. Evolution has no explanation for the female for every species in creation ...

PZ points out that it is populations, with already existing males and females, that evolve:

Species do not arise from single new mutant males that then have to find a corresponding mutant female — they arise by the diffusion of variation through a whole population, male and female.

And the light dawns:

"Okay, I've got it," Comfort continued. "Your belief is that species do not arise from single new mutant males that then have to find a corresponding mutant female.

Comfort even tumbles to the interesting and still not fully answered question of why sex evolved at all:

So, let's take it slowly for those of us stupid folk who like empirical evidence. We are looking at a contemporary male and a female elephant. They are part of a population of elephants. Let's go back to their elephant ancestors 10,000 years ago. They are still male and female elephants (they had to be because that's how elephants reproduce). Let's now go back one million years to what you called 'the populations of pre-elephants that contained males and females.' Obviously, they are still male and female way back then because that's how pre-elephants reproduced," Comfort said.

"Let's go back even further (100 million years ago) to pre-pre-elephants that also contained males and females. At what point of time in evolutionary history did the female evolve alongside the male? And why did she evolve?

The problem is that a (more) educated Ray Comfort is still stupid:

Then explain, if you would professor, why horses, giraffes, cattle, zebras, leopards, primates, antelopes, pigs, dogs, sheep, fish, goats, mice, squirrels, whales, chickens, dinosaurs, beavers, cats, human beings and rats also evolved with a female, at some point of time in evolutionary history. Professor, I know you believe, but please, give us who are healthy skeptics some empirical evidence. Remember, stupid people like me want good hard evidence before we, like you, become believers in Darwin's theory," Comfort said.

Darwin's theory, of course, involves common descent (something a supposed "debunker" of evolution might be expected to know), so each species doesn't have to evolve sex. It only had to happen once, most likely among single celled eucaryotes, the ancestors of all multicellular life forms.

And once on a roll, Ray just keeps learnin'. He even discovers that scientists think that birds are descendants of dinosaurs:

"One of the latest beliefs that is being pushed on the National Geographic channel, is the wild speculation that the dinosaur may have evolved into the modern-day turkey. There are no bounds to beliefs.

Ray is only about 40 years behind the times (about one hundred and forty, if you count the early suggestion by Thomas Huxley) but, hey!, he's catching up. Most of his "thinking" is 2,500 years behind. And what piece by Comfort would be complete without an argument from personal incredulity?:

Evolutionists have done to science what hypocrites have done to religion. They leap through the so-called paleontological record like a Disney cartoon kangaroo, making statements that have more to do with an overripe imagination rather than with true science. They are unregulated speculators with ridiculous theories that are leaving the minds of today's youth bankrupt, and they need to be held to some sort of intellectual accountability.

But there is one true fact amid all the blather:

I'm just one incompetent idiot that's trying to do that," Comfort said.

And failing miserably on all counts.
.

Comments:
Comfort's only problem is that he is absolutely clueless; his mind is a void. His statements clearly indicate he is completely unfamiliar with what the scientists actually say. Like a conservative who only receives information via Faux News, a person who only "learns" about evolution via the Discovery Institute, ICR, or AiG, there is simply no connection between that person's fancied universe and the real cosmos.

It's worse that even that, I think. He had all the information he needed to realize that sex only needed to evolve once -- he knows, based on his blather about "pre-pre-elephants," that there would have to be pre-pre-horses, pre-pre-giraffes, etc. -- but his mind just snaps back to the notion that each species has to evolve from one pair of individuals and ignores that the pre-pre-elephants, pre-pre-horses, pre-pre-giraffes, et al. could all be related by their pre-pre-ancestors. It's not just ignorance, it's an inability -- or an unwillingness -- to think through ideas that are already in his head.

give us who are healthy skeptics some empirical evidence. Remember, stupid people like me

Well make up your mind, Ray: are you a "healthy skeptic" or a "stupid person"? I could give you a hint, but that would take away all the fun....

But I really don't get Comfort. He obviously just makes all this shit up as he goes along -- does he really believe his own stream of idiocy, or is it a cynical act deliberately playing to the dumbest niche of the fundy audience?

I'm with John, I think, in his assessment of Comfort. To say that he's stupid or ignorant is to miss the point; Comfort's problem is that he is unable to think through the consequences of beliefs, and in particular, unable to think about things from any position other than his own.

Thus his "understanding" of evolution is completely refracted and distorted by creationist assumptions (e.g. about the existence of "kinds" or about the distinct creative acts necessary for "male" and "female"). He comes across as having neither the interest nor the aptitude to find out anything about what is actually accepted among evolutionary biologists, let alone the evidentiary basis for those hypotheses.

It's worth noting, I think, that this inability to think, especially from the point of view of someone other than oneself, plays a pivotal role in Hannah Arendt's understanding of Adolf Eichmann.