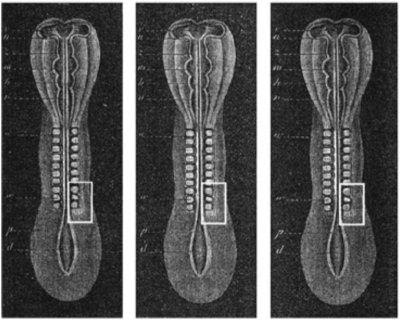 Those are the "fraudulent" drawings of Ernst Haeckel that creationists expend such high dudgeon on. Doesn't look much like the familiar images of the embryos of fish, salamanders, turtles, chickens, pigs, cows, rabbits, and humans that they complain are still being used in biology textbooks, do they? 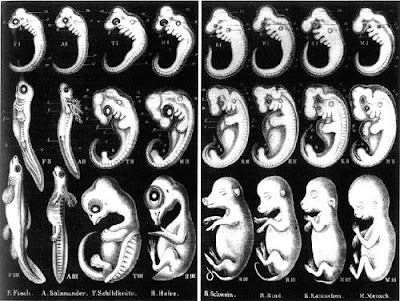 The second set of drawings are simplified for pedagogical reasons, to highlight the similarities, but were not the drawings that were discovered to be a single woodcut nonetheless attributed to a dog, a chicken, and a turtle, that creationists claim somehow invalidates modern evolutionary theory.

The anti-science crusaders blur the facts of the case because creationists, at least of the "professional" sort, such as Wells, are either stupid or dishonest or both.

PZ Myers has an excellent article, "Embryonic similarities in the structure of vertebrate brains" explaining what the creationists are doing and why, even on their own terms, the argument is stupid (though perhaps effective, given their target audience includes people like Don McLeroy of the Texas State Board of Education, whose delusions of competence far exceed his grasp of science). PZ also explains the real conclusions that modern scientists draw from similarities in the embryos of vertebrates.

For an explanation why Haeckel's drawings are not crucial to Darwin's theory, much less modern theory, see this article (pdf), "Iconoclasts of Evolution," by Kurt M. Pickett, John W. Wenzel and Steven W. Rissing. PZ also covered much the same ground in his earlier "Wells and Haeckel's Embryos" but also notes the exquisitely moronic complaint by Jonathan Wells that some textbook authors, instead of using Haeckel's drawings, use photographs ... the cads!

Unfortunately, gibberish is convincing to all too many people.
.