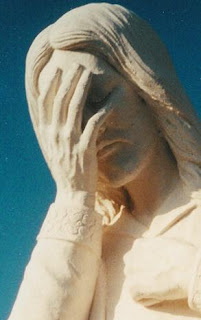 It seems examiner.com is becoming a hotbed of creationism. Here is another example by one Donald James Parker. He is complaining about a talk by Ken Miller he saw on YouTube (for reasons which will become obvious, I doubt he heard a word said). Here is the amusing bit:

How the ID movement featuring a total focus on scientific arguments and a total exclusion of specific mention of religion from the agenda is confused with the Creationism movement is a real fascinating area of study. Talk about your red herrings. I've come to the conclusion that evolution proponents have so turned off their minds to anything that detracts from Darwinistic philosophy that they don't even hear the arguments being laid out by ID proponents. That is really frustrating because we argue against someone who isn't listening and have to listen to claims of how they've debunked intelligent design when they don't even know what it is they're trying to debunk.

That "specific mention of religion" is funny enough as it is, given Judge Jones' determination that ID is just creationism stripped of specific mention of God to circumvent the Constitution. But how does Mr. Parker go about demonstrating that ID is science and not religion? Why, by accusing Miller of being an agent of Satan:

I've had communication with Dr. Miller in the past. He laughs about those who tell him his eternal destiny will be hotter than the Mojave Desert in summer. I didn't say that in my letters to him, but I did suggest that if Darwin's work has been a tool of the devil that Miller was just a pawn in Satan's army and finding that out on judgment day will be a bit of rude (and perhaps unpleasant) shock. If you truly love God, how would you feel to find out you have been giving support to his enemy? ...

If God didn't design life, then in what way is he God? Why would he need to send his son Jesus to earth to die a cruel death and suffer the mocking of inferior mortals to save something that he didn't design? I don't know if God created the world in six literal days, and I don't get hung up on that detail. I do know it didn't create itself using natural laws which themselves would have to be created, and life didn't come along by itself. If God had any hand in how we arrived at where we are, that means it is designed. He has placed his signature in multiple places on this portrait known as the universe.

And here I thought he said there was no specific mention of religion in ID.
.
Link - Posted by John Pieret @ 2:42 PM

Comments:
I must be reading too many blogs. Whenever I read something like Mr Parker's screed I wonder if he couldn't be an NCSE sock-pupppet.

You've missed the point. Kenneth Miller believes in God and evolution. My point is that if God used evolution to bring about all the species we find on Earth, Darwin's concept of non-directed mutation is not legitimate. God would have built the direction for those mutations into his creation.

My contention is that it is impossible to embrace both Darwin and theistic evolution.

And I have yet to meet an evolutionist who even understands what intelligent design is. I'm not into ID since I don't deal in the realm of science - which is simply the unraveling of all the secrets of God's creation.

And Mr. Spedding, I am nobody's puppet, except for the God of Abraham, Isaac and Jacob and Father of Jesus Christ.

Yet Kenneth Miller, I am sure, believes himself to be as devout a Christian as you and he claims to be able to reconcile his faith and his science. Who are we to believe?

My point is that if God used evolution to bring about all the species we find on Earth, Darwin's concept of non-directed mutation is not legitimate. God would have built the direction for those mutations into his creation.What direction would that be? The creation of human beings? Science has revealed an observable Universe of billions of galaxies each comprised of billions of stars. All that was created just as a backdrop for little old us? That's a bit extravagant to say the least.

There is also no reason why an omnipotent God could not have set up the initial conditions and then let evolution follow whatever course it chose. Well, no reason except possibly that, being also omniscient, He would know the outcomes of such an experiment in advance, so why bother in the first place?

And I have yet to meet an evolutionist who even understands what intelligent design is.

There really isn't that much to understand. ID is essentially the contention that the appearance of design in nature is, in fact, not just appearance but really design, the product of a real designer although they resolutely refuse to speculate about the identity or nature of that designer. This is a little odd since you would think that would be a matter of intense interest to any self-respecting scientist.

And Mr. Spedding, I am nobody's puppet, except for the God of Abraham, Isaac and Jacob and Father of Jesus Christ.

But then that is exactly what a sock-puppet would say, isn't it? However, you may rest assured that I am quite happy to take you at your word that you are not.

Heh. After all these years of arguing these issues, neither Ian nor I have missed the point (I've been at this for well over a decade and Ian, I suspect, has been doing it at least as long). In as much as you admit you aren't "into ID" you're in no position to judge our knowledge of it. We are fully aware of what ID claims and, being aware of it, we know it isn't science. It is, in fact, 17th Century natural theology dressed up in the thinnest veneer of science, which is why a conservative Bush-appointed federal judge had no trouble seeing right through it.

We certainly haven't missed the point that it is your and all IDeologists assertion that your religion is incompatible with science ... which simply makes your contention that ID is science transparently dishonest. You don't give a damn what the science is, you'll simply make up whatever nonsense is necessary to save your religion.

Miller, on the other hand, cares about the science and tries to fit his religion to what the science shows. For that much he has my respect. Personally, I don't give a damn about what you or Miller believe about any god(s). Stop misrepresenting what science is to innocent children and you can believe any damn-fool nonsense you want.

ID is essentially the contention that the appearance of design in nature is, in fact, not just appearance but really design, the product of a real designer although they resolutely refuse to speculate about the identity or nature of that designer.ID is not a strictly defined set of propositions, so any attempt to phrase it that way will be open to the charge that "you don't understand it". ID is rather something like an advertising "concept" - what is there to understand in "it hits the spot", or any advertising concept?

Anyway, some advocates of ID refrain from even claiming that there is a designer. One advocate has said that there was a designer, but the designer has gone away, and a variation on that might be that there hasn't been any designing for thousands or millions of years.

And I'd point out that the "design" is limited to only some patterns in nature. I haven't heard of ID advocates saying much about the extremely complex specified pattern of the "tree of life" with the "appearance" of "descent with modification" being "designed" with that appearance. After all, to admit that that was designed might lead one to think that it was deliberately designed that way - either truly (and thus "evolution happens") or falsely (and thus "is a deceit").

Maybe the closest to substantive content would be something like: "Something, somewhere, somehow is wrong with evolutionary biology."

John, let me start out by saying that your site is part of my daily routine, and, in my opinion, you should be getting many more comments than you do. (But please not like PZ!)

Further, Ian is a familiar commentator, but especially,
Tom S. is a long term contributer to talk origins and many other similar sites, and one of the few folks I would term "wise."

Now, to this fellow Parker. As many have noted, it is but a small quantum "leap" from ID supporters claiming that "it's just science" to prolonged religious rants in the same post. (hat tip to Lennny Flank.) He, most amusingly, as John wrote, puts these contradictions together in a couple of paragraphs. He doesn't quite say that Ken Miller is a tool of Satan, but he strongly implies it.

Poor Ken! He's doomed to an eternity in the Lake of Fire!
Well, my bet is that Parker doesn't think much of Catholics anyway.

You have a great site, Jhn! Please keep it up. And heartfelt thanks.

Parker is quoted as saying, "...they don't even hear the arguments being laid out by ID proponents...That is really frustrating because we argue against someone..." which suggests he has some basis as an authority on Intelligent Design. But in his comment he states "I'm not into ID since I don't deal in the realm of science - which is simply the unraveling of all the secrets of God's creation."

ID claims to be all about science, not religion. Mr. Parker admits having no scientific expertise and not being "into" (a proponent of?) ID. Why then is he arguing for ID against those Darwinists?

That's easy enough to figure. He's admitted wanting to teach the children of the world that a "loving God created their world and them and He wants us to live with Him forever" and that includes in science classes. Quite beyond the Constitutional problem, he knows he needs to have his religion sound at least vaguely sciency and ID is the only game in town that has the remotest chance to make it into public schools. I think it is charitably called "grasping at straws."