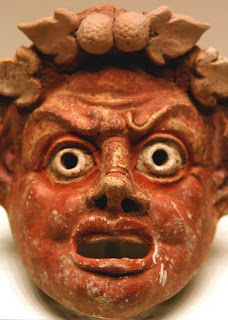 Donald James Parker is back and his whine is not aging well. It seems that, when confronted with the contradictions in his position that Intelligent Design Creationism is science suitable for teaching in public schools, he retreats into ever tightening circles of self-contradiction.

To begin with, he claims I accused him of:

... wanting to pervert the children of the world by teaching them that a loving God created their world and them and He wants us to live with Him forever ...

I did no such thing, of course, "accomodationist" that I am. I did not discuss at all what I thought of his religion, except to say that I respected Ken Miller's attempt to reconcile his religion with the facts of the world and, by implication, did not respect Parker's attempt to do the reverse by bending the knowledge so painfully gained by science (presumably through his God's gift of intelligence) to fit his narrow sectarian belief. I suppose it totally fails to register with Mr. Parker that his statement contradicts his original claim that the ID movement features "a total focus on scientific arguments and a total exclusion of specific mention of religion from the agenda."

As a strong supporter of our Constitution and the rule of law, my personal opinion of his religious beliefs is not relevant. I will defend Mr. Parker's right to try to proselytize his religion, including to children who don't have the intellectual ability to see through his claims. He may even mislead children about science with such hoary creationist tales as Nebraska Man and Piltdown, though, in doing so, it is a mystery how he can keep a straight face while contending that ID should not be "confused with the Creationism movement." He can also throw around "irreducible complexity" (likely without any understanding of it) in apparent ignorance of the fact that, long before Michael Behe was a gleem in his parents' eyes, evolutionary theory predicted and explained such structures. What he cannot do under our law is use the government to proselytize for him. In short, preach ID in churches, preach it in homes, preach it on every street corner but you cannot use my tax money to preach it in public schools.

Amusingly, Mr. Parker relates an "epiphany" that he "will probably never convert a single atheist because of the compelling logic that I spew out of this mortal brain." Never mind that I am not an atheist -- no doubt, by his "definition," I am, along with Ken Miller, because I don't believe in his particular (dare one say peculiar) version of God. It never seems to occur to Mr. Parker that perhaps there is another explanation for his failure. And it isn't like he needs to look all that far for the reason. Take the "arguments" he retreats to:

"#1 Where did matter/energy come from?" Well, from the Big Bang, of course. Now, where did the Big Bang come from? We don't know, though we have some intriguing ideas, including the elegant math underlying string theory. But Mr. Parker is quite right that there is an argument to be made that there is an infinite regress involved in explanations of matter and energy (and space) and something outside of what we consider "natural" must have started it all. But that "something" need not be anything that looks remotely like his version of God. It could be Aristotle's Unmoved Mover, the Deist god who retreated from the world once it was set it in motion or a pantheistic god. And, of course, once the existence of matter and energy are granted, it is no longer an argument against evolution by natural means, which can be explained by the workings of the universe we do observe.

"#2 Where did information come from?" First, Mr. Parker will have to define "information," a task he doubtless cannot accomplish, since his mentors at the Discovery Institute have never managed it. Waiving around vague terms does not impress. Simple, and well-understood, chemistry, coupled with a feedback loop from the environment called natural selection, is sufficient to explain biology as "complicated" as we see. It is up to the IDers to show that there is something "magical" about whatever it is they are calling "information" that makes it impossible.

"#3 From whence came the natural laws which govern our universe and are actually given credit for birthing the universe? No matter who is telling the story, everybody has to rely at some time of a supernatural first cause (something bigger than nature itself)." This is simply #1 restated in different terms and subject to the same response. The "laws" of nature -- an example of the constraints of human language -- can also be thought of as the proposition that matter and energy, given the same conditions of each within identical space, will interact in the same way. The "laws" of nature are simply the regularity of effects that would be expected from identical causes. Once you grant the existence of matter, energy and space the "laws" of nature follow.

"#4 If evolution occurs by mutation of genes, where did the genome come from?" Now Mr. Parker is descending into farce (which will get worse, trust me!). Genes are chemical reactions operating by the ordinary processes of chemistry. Nothing in Mr. Parker's presentation stands in the way of their evolving from simpler precursors by -- what else -- mutation of simpler versions of those chemical reactions. Surprisingly, Mr. Parker here misses the old '#2.1 Where did life come from?' but we are getting better and better ideas about that all the time. As a conceptual argument, this fails because Mr. Parker omitted the step of showing that there is something unique about the genome that prevents its evolution.

"#5 – has anyone ever traced the formation of a complex creature from a one celled organism?" What does Mr. Parker think happens when a newly fertilized zygote develops into, say, a human baby? But I'm guessing that this confused statement actually means something like "have humans directly observed (omitting caveats about what "direct observation" is) the step-by-step evolution of some extant multicellular organism from its unicellular ancestor?" The answer, of course, is no. But no one has ever directly observed each and every cellular division leading from a human zygote to a baby either. That doesn't mean we aren't tolerably sure of where babies come from. This is just another claim that, if we don't have perfect and complete knowledge, we don't have any knowledge at all and is silly in the extreme.

But it gets worse. Mr. Parker follows in the hallowed footsteps of Ray Comfort in asking truly idiotic questions:

How did legs develop in pairs? How did the muscles get attached to bones, ligaments, and tendons, and how did the brain assume control over the whole structure – in gradual steps? Logic dictates that partially completed and useless appendages etc. would be detrimental to the survival of a creature.

This is actually two "arguments," one having to do with bilateralism and the other with the old "half a wing" cavil, again straight out of the creationist handbook. Legs developed in pairs because, long before any multicellular creature developed legs it developed a bilateral body plan. Such creatures developed a bilateral plan because, as we know from the embryology of modern multicellulars, it is easier and more efficient (natural selection again) to "build" a body by constructing two mirror images along a "central core." Mr. Parker demonstrates his ignorance of the very evolutionary theory he presumes to criticize by assuming that legs are something that are "slapped onto" creatures, in the nature of some childlike creator playing with Lego blocks, instead of appendages evolving over immense time from precursors that were quite different and with different uses. Leg muscles get attached to bones, ligaments, and tendons, and are controlled by the brain because what they evolved from were all attached to the body and already wired to the central nervous system. And at every point the precursors to legs were useful (or at least not exceedingly detrimental) to the creature.

All this has a lovely metaphor in a "joke" Mr. Parker thinks is applicable to scientists:

Mr. Parker, fleas don't have wings and they don't fly.

Similarly, all your "arguments" are made in profound ignorance of the natural world, evolutionary theory and science in general.

Yes, Mr. Parker, scientists don't know everything and they do only answer the things they can answer. Contrary to your assertion, they do not claim to have everything "staked out like a butterfly on a pin." Scientists are themselves skeptics who question evolutionary theory, constantly revising it as new evidence comes to light and, if there ever comes a day that it does not fit the evidence, they will overturn it. But it isn't being a skeptic to deny all knowledge -- that is, I'm afraid, as you say, being a moron. With the present state of our knowledge about life, denying evolution is exactly on the order of denying that the Earth orbits the sun rather than vice versa because our knowledge of gravity and astronomy are not absolutely complete.

Mr. Parker, you are correct to say that "[t]here is nothing in nature that can't be explained by an all powerful creator" but that is a basic reason why such a being can't be a scientific explanation. There is no test that can confirm or deny such an explanation and science is about testing (though not in the narrow sense you mean, limited to recreations in laboratory test tubes). You can posit a world in which there is no such thing as gravity and the planets stay in their orbits because invisible and undetectable angels push them around but it would take a moron to call that science. I'll leave it up to your theology to deal with such a trickster god that gives us the intelligence to formulate a science that empirically tests the workings of the world, and use it to such good effect, but then fools us by actually making the world in such a way that science must mislead us.

You are, as I've said repeatedly, free to argue that there is some "logic" that points to a designer/creator. You can even call it "science" in your church or home or on any street corner and we will do no more than point and laugh.