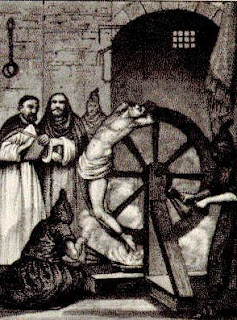 Melanie Phillips won't let consistency stop her. Having made a fool of herself already, she proceeds to show that she can't keep an idea in her head all the way from the beginning to the end of her piece. Consider these statements she makes:

Since ID holds that some vague kind of intelligent force must have been behind the creation of the universe, there's surely very little difference (and considerable overlap) between ID proponents and the vast majority of mainstream religious believers ...

ID is a metaphysical idea that comes out of but stands separate from science, in that science leads here to an idea with which by definition it must abruptly part company.

But, still, she cites with approval Steve Fuller's argument "that the way ID's practitioners approach the debate means they are actually engaged in a scientific enterprise."

How, exactly does one part company with science but still be engaged in a scientific enterprise?

She also notes Fuller's rejection of young-Earth creationism because "it has abandoned the scientific method." But what are IDers doing when they "separate" from science?

The reason she says that ID "comes out of science" is never made clear. The closest she comes is to say that ID "talks [science's] language," pointing to Michael Behe's concept of "irreducible complexity." But before she is done, she also says:

I am not in a position to judge whether its arguments about 'irreducible complexity' and the logic of intelligent design are soundly based or not.

Then why is she in any position to judge whether ID legitimately "comes out" of science or not?

And, lest we forget, the young-Earth, biblically-explicit creationists, whose linkage to IDers so incenses her, also have "creation scientists" who spout vaguely scientific-sounding babble. Why aren't they coming out of science too?

There is much else that is wrong with her article, not least her atheist-bashing. She characterizes opponents of ID as "Those who have imbibed evangelical atheistic materialism with their mothers' milk" and "materialist fundamentalists" engaged in "intellectual fascism" and a "secular inquisition." All the while she is apparently unaware that Ken Miller, whose statement that ID is "nothing more than an attempt to repackage good old-fashioned Creationism and make it more palatable" originally triggered her ire, is a devout Christian. And she claims to be a "journalist who has always gone wherever the evidence has led ... trying not to make too many mistakes." Right there is reason enough to doubt her success at her trade.

Quite simply, anyone who understands what ID really is and values secular government, the separation of church and state and good public science education opposes the abuse of science represented by ID. It is hardly limited to atheists or materialists.

The whole point is that it states that the 'intelligent designer' it posits as the only logical inference from scientifically verifiable complexity cannot be known through scientific means. This is because the essence of the ID idea is that there is a limit to science beyond which it cannot go, since science cannot prove nor disprove the existence of God nor any kind of 'ultimate designer' of the universe which thus stands outside that universe and its laws. That is where science stops and faith begins.

In short, even she recognizes that the entire focus of ID is really a theological one. If ID clearly labeled itself as such, no secularist would pay much attention to it. It is only its pretense at being science that engenders the response she calls an inquisition ... which, in fact, is nothing more, in scope or intensity, than what most other dissemblers regularly receive.
.
Link - Posted by John Pieret @ 8:59 PM

Comments:
Melanie Phillips writes for the Daily Mail. That in itself makes me wish there were a nethermost region of hell to which she and her kind could be consigned. Alas, the Universe is not a just or fair place.

So, basically, Melanie Phillips is, hereself, a disproof of Intelligent Design? Sounds about right.