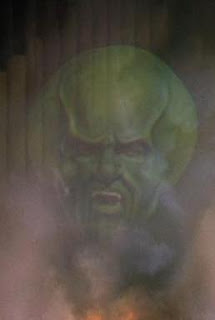 In the Food for the Soul blog at The Christian Post, described as "A blog about books, news and other forms of Christian media matter important to the faith community," one Randal Rauser, associate professor of historical theology at Taylor Seminary, complains about "How intelligent design is misrepresented by its friends."

Specifically, he kvetches that Expelled, after making the point through Paul Nelson (a young-Earth creationist) that "Intelligent design is a minimal commitment scientifically to the possibility of detecting intelligent causation," then goes on to undermine the point in ways he will explain in his next post. But this is what he says about what ID should be thought to be:

[S]ince the sole commitment in ID is to the detection of intelligent causation, you could be an atheist and an ID theorist; it matters not one whit to the theory whether that intelligence is divine.

The importance of this point cannot be overstated because once you realize that ID is a minimalistic claim which is unconnected to any explicitly religious doctrine, you can begin to see that ID might well belong in the science classroom (and even more importantly, in the science lab).

As John Wilkins has pointed out:

ID requires a designer who can visualise all possible combinations of chemistry over billions of years. If that isn't a supernatural designer, I'll eat my epistemological hat!

It's also amusing that the main point is to get ID into the science classroom and the science lab is only an afterthought ... naturally enough, given that there has been no science yet in ID ... the exact opposite of the way it works with real science.

So, just ignore that theologian behind the curtain trying to feed the souls of the faith community with Christian media from his seminary and just concentrate on the big face of ID blowing a lot of smoke around.
.
Link - Posted by John Pieret @ 10:48 PM