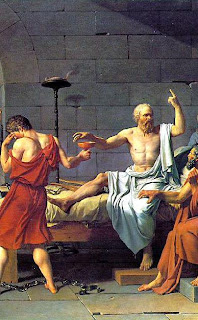 In which I agree more than disagree with Jerry Coyne.

Coyne quotes a blog post by Andrew Brown (who, with Michael Ruse, has recently drawn the ire of Coyne), the relevant part of which to me is:

But the American courts have never been asked to decide whether science is the negation of religion: in fact the defenders of evolution and of science teaching in schools have gone to great lengths to ensure that the question was not asked. The "accommodationists" whom Coyne so despises, have been brought out in all the court cases so far to say that that evolution and Christianity, science and religion, are perfectly compatible. If the courts were asked to decide whether not whether ID was a religious doctrine, but whether evolution was a necessarily atheist one, and if they decided that Jerry Coyne and PZ and Dawkins and all the rest are right, then science teaching would become unconstitutional in American public schools. They would, in short, have fucked themselves.

Now I've thought it right and proper to upbraid Coyne for calling science a "world view," as well as for his substitute formulation of claiming that the only proper "attitude" for scientists is to demand evidence for all their beliefs (which, in context, was saying the same thing). I even pointed out at Coyne's blog that if, in fact, science is a world view, it would have to be taught as a philosophy only, not as true, and that Coyne's statements could be used as ammunition by creationists in any future cases.

Creationists have long made the claim that evolutionary theory is just atheism dressed up in scientific terms. Judge Jones addressed this claim in the Kitzmiller case:

[M]any of the leading proponents of ID make a bedrock assumption which is utterly false. Their presupposition is that evolutionary theory is antithetical to a belief in the existence of a supreme being and to religion in general. Repeatedly in this trial, Plaintiffs' scientific experts testified that the theory of evolution represents good science, is overwhelmingly accepted by the scientific community, and that it in no way conflicts with, nor does it deny, the existence of a divine creator.

To the extent that some of the more, shall we say, vigorous statements of "scientist-atheists," as Coyne calls them, tend to negate that position, there is a potential concern for the effect it may have in future cases. Conversely, to the extent that other scientists and/or scientific organizations say that science neither conflicts with or denies the existence of a divine creator, it reduces those concerns.

But (and its a big but) the views of Coyne, PZ and Dawkins in open debate are unlikely to tip the balance in any court case, precisely because they are unlikely to make it into a science classroom. As long as the scientist-atheists are willing to say what Coyne says in his most recent post:

Does anybody seriously think that teaching evolution is a deliberate promotion of atheism? If so, I haven't met any of them, and that includes P.Z. Myers and Richard Dawkins. ...

Actually, we teach evolution because it's a wonderful subject, explains a lot about the world, and happens to be true. And yes, it's likely that teaching evolution probably promotes a critical examination of religious beliefs that may lead to rejecting faith. But teaching geology, physics, or astronomy does that, too. In fact, education in general leads to the rejection of faith. (Statistics show that the more education one has, the less likely one is to be religious.) Should we then worry about teaching physics, astronomy, or indeed, allowing people access to higher education, because those "promote" atheism?? Should we constantly be looking over our shoulders because the courts may catch onto this? Well, American courts may be dumb, but even our benighted Supreme Court is more rational than Mr. Brown.

... the debate over accommodationism and incompatibilism should be recognized as a larger philosophical debate outside of science itself. Teach only the science and the "problem" evaporates. Any tendency to reject faith because of the teaching of the science is what church and state scholar Kent Greenawalt has called "spillover effects," which do not render the teaching unconstitutional because they are not a "primary effect" of it. Government could even teach about the accommodationism / incompatibilism kerfuffle, as long as it didn't take sides as to which was right.

So, no, what Coyne and PZ and Dawkins say about their personal philosophies about science and religion should not result in science being relegated to philosophy classes or, worse, ejected completely from public schools, though it would be nice if they kept the distinction between their philosophies and science clear.
.

Comments:
Repeatedly in this trial, Plaintiffs' scientific experts testified that the theory of evolution represents good science, is overwhelmingly accepted by the scientific community, and that it in no way conflicts with, nor does it deny, the existence of a divine creator.

I wonder why they don't say "the existence of my divine creator". Obviously they have a different creator than the other guys. Oh I forgot, no they don't. Everybody usurps everybody else's creator.

Okay then I guess it doesn't deny the existence of the divine creator of the other guys, and so therefore is not a misleading (dare I say dishonest) statement. Never mind then.

Okay then I guess it doesn't deny the existence of the divine creator of the other guys, and so therefore is not a misleading (dare I say dishonest) statement.

In this context, the important point is that evolution does not deny the existence of some sort of divine creator which, arguably, would make it the equivalent of the philosophy of atheism. Every religion has to deal with the "spillover effect" of the science as best it can.

How about these science cartoons?

There are many good ones on Vadlo search engine http://vadlo.com/cartoons.php?id=1.