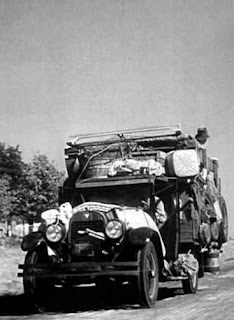 Is a perhaps surprising defection in the works?

Stephen M. Barr, a theoretical particle physicist at the Bartol Research Institute of the University of Delaware and a "theistic evolutionist", has been having a running argument with John West of the Discovery Institute, proving the uncomfortableness of the middle. So much so that Barr says:

If I am right in saying that evolutionary biology itself is not atheistic in its implications, then how do I explain the fact so many evolutionary biologists are atheists? In my view, there is not a single, simple explanation for this, but a complicated set of historical and sociological factors. Since its inception, evolutionary biology has been the center of a constant battle between fanatical enemies of religion on one hand and biblical literalists on the other, who have fed off each other and in many ways reinforced each other.

That has become part of the narrative surrounding the field of biology, so that many people who go into that area are socialized into anti-religious attitudes. Moreover, certain kinds of people tend to be drawn to certain professions. At least one study concludes that the over-representation of atheists in science is due to atheists being drawn to science as a profession rather than scientific training or information making people lose their faith. This is a complicated subject, and I don't propose to attempt a complete theory of the origins and causes of scientific atheism. It is, however, very simple-minded (and also not very helpful to the cause of religion) to suppose that scientific atheism is just a consequence of the fact that scientific theories logically entail atheism.

Be that as it may, one interesting thing is a comment by Francis J. Beckwith, a longtime supporter of Intelligent Design:

Nice work, Steve. You were able to put clearly in writing what has been percolating inside me since I first became interested in science/theology issues during my PhD days at Fordham in the mid-80s.

Barbara Forrest didn't buy Beckwith's disclaimers earlier this year but it's hard to see what motive he would have for making such a comment to Barr's post at First Things. Could Beckwith be moving toward theistic evolutionism?
.
Link - Posted by John Pieret @ 11:33 PM

Comments:
I've always been there. Read my work carefully. The problem is that it is very difficult for those so committed to the culture war motif of this debate to actually believe someone can be interested in ID, have doubts about it while think it has some merit, but still oppose philosophical materialism on a variety of other grounds.

There were two articles that really influenced me early on in my career. The one was by a member of my PhD dissertation committee, James Sadowsky, S.J. And the other was by Dallas Willard, a professor of philosophy at Southern Cal. Here's Sadowksy's: http://www.anthonyflood.com/sadowskydarwindesign.htm Here's Willard's:
http://www.dwillard.org/articles/artview.asp?artID=42

Each, in his own way, made the argument that Darwinian evolution did not preclude design (or better, "final causality") in nature. I just recently re-read Etienne Gilson's outstanding work on this matter: From Aristotle to Darwin and Back Again (UND Press). Now out of print, it will be republished this October by Ignatius Press.

I made my peace with Darwin over two decades ago. Thankfully, that has not precluded me from thinking critically with no axe to grind about things like ID in terms of the legal and policy questions.

I'm sorry, then I think Forrest is right. I have no problem with you opposing philosophical materialism or even taking ID to be an interesting theology. But, then, there is no justification for advocating that that it is science for purposes of government endorsement in science classes. It's not like philosophical materialism is being taught as true in K-12 education (or, if it was, the proper response is to stop it from being taught, not to "counterbalence" it with equally unconstitutional teaching). The other option is to argue that our entire 1st Amendment jurisprudence is wrong and government should be allowed to endorse religion.

Frankly, I don't see how those options fail to be such stark contrasts that close reading would be unnecessary in order to know which you are advocating.

Nor do I see, then, how your position is close to Barr's. Do any "theistic evolutionists" argue that their views should be treated as science in government schools rather than theology?

If you made your theological peace with Darwin long ago, it's then time you make it with our Constitution.

Never said it was "science." Again, read carefully. I actually argue that the question of what constitutes science is in a sense unanswerable and irrelevant to the issue.

Having said that, I do not believe "ID" should be taught in public schools. In fact, that was never my project. My project addressed the question of whether certain sorts of arguments critical to philosophical materialism could be offered in a modest and tangential way in a public school science class. And the answer, of course, is clearly yes. ID was, of course, the most interesting proposal at the time I was in law school (2000-01). Today, if I had to rewrite my dissertation, I would be more careful to distinguish different sorts of challenges that are not affiliated with the ID movement. I sort of did that by treating ID as a kind of general category for all points of view that deny philosophical and methodological materialism. But today, again, I would have done it differently. In fact, I am presently working on a law review article on just that very distinction. It's tentatively titled, "How to Be An Anti-ID Advocate." It should be published sometime in Spring 2010.

Remember, just because universities divide disciplines into departments does not mean reality is divided that way as well. At the end of the day, all of this should just be about arguments and their plausibility and not about metaphysical litmus tests.

In any event, I can't make you unbelieve what I know to be false about myself. All I can hope to do is to offer an account of my own beliefs in the best and clearest way I can. But sometimes, alas, I fall short.

I see, you don't say ID is science you just said that science can't be even tolerably well defined and we might as well just go ahead and include metaphysics in science classes. Why call them science classes at all then?

There has always been ways that arguments critical to philosophical materialism could be offered in a public school ... they're called philosophy classes. But then you and the IDers couldn't claim that your theology/philosophy is science, which is the real objective of ID Creationism.

If what I believe about you is false, you could go a long way towards convincing me if you publicly and prominently disavowed the clearly dishonest program of the Discovery Institute ... unless you're going to tell me we can't really tell truth from lies.

I actually argue that the question of what constitutes science is in a sense unanswerable and irrelevant to the issue.

In a sense it's unanswerable. And then on the other hand, in a sense it is. Lol, now what...

Let me guess: it's irrelevant.

For somebody who doesn't like categorizing reality, he sure has a lot of categories.