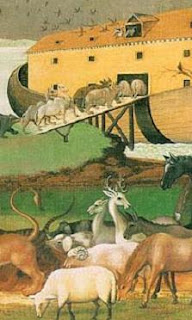 Jim Lippard has taken one for the team and sat through Creation Ministries International's "documentary," The Voyage That Shook The World. You can see his review/debunking here.

Jim notes that the film at one points sets up a novel opposition between evolution and creationism in that evolution supposedly argues for the fixity of species while creationism is in favor of their mutability:

The film suggests that the religious view is that the wide diversity and geographic dispersal of living things emerged in the last few thousand years since the flood of Noah, which entails a rapidity of evolution that evolutionary scientists would reject as implausible. I believe the film's offered cases of rapid morphological changes in finch beak sizes are correct, along with its cases of hybridization that include hybrids between land and marine iguanas in the Galapagos. CMI creationist Robert Carter asserts that this is evidence of a young age of the Galapagos islands, because otherwise all the species would have mixed rather than being distinct, rather than concluding, for example, that some of these species are reproductively isolated and others aren't. I almost had the impression that I was witnessing the evolution of a new form of creationism-as-hyperevolution, that required special creation only because a young earth didn't allow enough time to generate the diversity of current life on earth.

I don't think that is all that new, in that it goes back at least as far as John Woodmorappe's 1996 book, Noah's Ark: A Feasibility Study and Answers in Genesis' list of Arguments Creationists Should Not Use (aimed at Kent Hovind's more egregious nonsense). It falls out of their need to limit the number of animals on the ark (to keep their story only ludicrously improbable), while explaining the enormous diversity of extant life on Earth. At number 8 on AiG's list, "No new species have been produced," they say:

The concept of kind is important for understanding how Noah fit all the animals on the Ark. If kind is at the level of family/order, there would have been plenty of room on the Ark to take two of every kind and seven of some. For example, even though many different dinosaurs have been identified, creation scientists think there are only about 50 "kinds" of dinosaurs. Even though breeding studies are impossible with dinosaurs, by studying fossils one can ascertain that there was likely one Ceratopsian kind with variation in that kind and so on.

After the Flood, the animals were told to "be fruitful and multiply on the earth" (Genesis 8:17). As they did this, natural selection, mutation, and other mechanisms allowed speciation within the kinds to occur. Speciation was necessary for the animals to survive in a very different post-Flood world.

In just 4,000 years we went from some 15,000 pairs of animals on the ark (if memory serves for Woodmorappe's number) to 10 million to 100 million species today. Even if we restrict the number of species to those that have been named and catalogued by human beings, that would be about one new species a day since the Flood. And we never noticed!

I don't recall seeing a version of creationism that relied only upon a young earth as the argument that there must have also been special creation. And, of course, I still haven't seen that, since the "limits to change" and "no new information" arguments both came up in this film.

Comments:
"A major disproof of creationism is the fact that, for every 'solution' they come up with, they create at least two new problems."

Talk about a "theory in crisis"! Ha!

A "theory in cardiac arrest and three days buried" is closer to it.

It also needs to be pointed out that, if "kinds" correspond to either "families" or "orders," then human beings are of the same "kind" as the great apes.

The most recent taxonomies class the great apes and human beings within the family Hominidae, with two subfamilies, Homininae (humans and the African apes) and Ponginae (orang-utangs and extinct Asian apes). The genera Ardipithecus, Australopithecus, and Homo belong the subtribe Hominina.

Of course creationists would simply reject the results of recent cladistic analysis -- I mention this only to further underscore how much of modern science a creationist must be committed to rejecting. This needs to be constantly borne in mind when they assert that they are enthusiastic supporters of science and only reject evolution (which they tend to regard as bad science, as out-dated/irrelevant science, or as ideologically driven pseudo-science).

I find the tu quoque strategy that they've co-opted to be quite fascinating.

I love how this shows once again that creationist do not have a gripe with the fact of evolution itself but with its implications (For example, common decent means we are one of those icky animals rather than specially created in a supreme beings images.)

Yet you never heard the creationist on the street saying continental drift or common decent causes Nazism.

I wonder if a completely consistent creationist would have to deny plate tectonics, since it's not mentioned in the Bible.

I am not too sure whether or not the specialness of humanity is clearly a Biblical conception. It emerges in Hellenistic philosophy, esp. Stoicism and Neoplatonism, as an alternative to Epicureanism, which seemed to go too far in the material-reductionist direction. In Christianity, these Hellenistic elements fused with the Biblical picture -- hence the need for a 'New Testament'.

So far from it being the case that materialism is a modern deviation from a "Judeo-Christian tradition" -- core elements of that tradition were reactions against ancient materialism.

I wonder if a completely consistent creationist would have to deny plate tectonics, since it's not mentioned in the Bible.

I think you are positing a mythical, nonexistent creature. In the case of plate tectonics, they simply pump it full of steroids and amphetamines and come up with "hydroplates" and send them skidding across the face of the Earth at hyperspeed.

So far from it being the case that materialism is a modern deviation from a "Judeo-Christian tradition" -- core elements of that tradition were reactions against ancient materialism.

Which is why you still have creationists conflating evolution and Epicureanism.

I have the MP3 of a Kurt Wise lecture a few years ago in which he says essentially that there was a period of hyper-evolution in the two centuries following the Flud in which new species were popping up daily and weekly:
.
Wise puts the Biblical "kind" at roughly the level of a standard taxonomic family. From this he infers that the birds of the air and beasts of the field named by Adam comprised only about 100 kinds. (Adam didn't do doing the fish and plants). Wise goes on:
.
The Ark, I'm estimating, aside from insects which we can stick into one room, is only carrying probably 350 kinds of animals. In other words, I suggest probably only about about 1,000 critters were on the Ark, besides the insects, of course.

We also realize that this diversification and creating ability of species has to happen in a very short time. We've got ... the Bible's mentioning in Job and Genesis lions and camels and wheat. These are things that were produced later. And so that means that all those species had to have been in place by the time of Abraham and Job, even perhaps before him. So we're saying that this diversification, these thousands of species, these hundreds of species, were produced within 200 years of the Flood.

So the concept we have right now of the Flood is that Abraham, as he was growing up, every time that he looked outside of his tent, he's going to see a different species this week than has been seen on the planet -- nobody's seen this species.

200 years is 73,000 days. So yeah, new animal species were popping up weekly, if not daily. And, according to Wise, all the genetic information for those new species, including such things as the adaptations of camels for desert living and adaptations for carnivory (including the radical changes in carnivores' digestive systems, apparently) were pre-coded into the "kinds" when they were created, but waited to be "expressed" until they were needed. So this post-Flud hyper-evolution was some sort of flowering of a whole lot of pre-encoded 'information,' a sort of kind-by-kind front loading.

And that, my children, is how the camel got its hump.

since it's not mentioned in the Bible

There are lots of things that aren't mentioned in the Bible. That the Grand Canyon was carved out by Noah's Flood. That God created fixed "kinds". That humans form a "kind".

There are lots of things that aren't mentioned in the Bible. That the Grand Canyon was carved out by Noah's Flood. That God created fixed "kinds". That humans form a "kind".

Oh, certainly -- the very notion of a "kind" is an Aristotelian notion, not a Biblical one.

One way (among many others) of seeing what's wrong with creationism and fundamentalism is that it says that one's eternal salvation or damnation depends on whether one accepts as true the best science of the 3rd century BC.

the best science of the 3rd century BC.

The fundamentalist-creationist literalists rather reflect the culture in which they are raised and impose that on the Bible. There are literalists who will insist that the Bible tells us that the earth is a sphere and that species are fixed. But both are anachronisms in the ANE: they are not, and could not be, supported by the Bible.

Let’s use their numbers. Heck, I’ll even be conservative and say there were only 10,000 animals total on the ark. Six people had to feed and water these animals (because the bible says so) and, then of course there is poop.

Six people feeding 10,000 animals a day would require each person to feed 1667 animals a day. If they worked 16 hour days, (because they were good biblical people) they would have to feed 73 animals an hour or feed each animal in 50 seconds, every day for a year.

Then assuming each animal poops a pound of poop a day, the first 40 days all the windows are closed because it’s raining in biblical amounts, (and because the bible says so) about one half a ton of poop is now on board the ark. Make the poop whatever number you want, but you would not be able to breath the air on the ark.

By the time they open the windows and start shoveling the poop out, each person would have to shovel about 60,000 pounds of poop to catch up and then about 1500 pounds of poop a day (along with feeding and watering the animals).

No wonder Noah got off the Ark and got drunk and fell down naked.

... And then healed them of the illness that came with a year-long constipation.

... And then told Noah & company ahead of time when he ended their constipation, so they could get out of the way.

John - A "theory in cardiac arrest and three days buried" is closer to it.

Be careful with your humor - Jesus was buried for three days and look at what happened....

Be careful with your humor - Jesus was buried for three days and look at what happened....

People will come along and make up myths about it? Oh, wait! That's what's already happened with creationism.