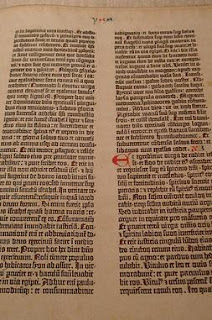 The Dishonesty Institute has released a "College Student's Back to School Guide on Intelligent Design."

All you need to know about this piece of crap is that, within two short paragraphs, it perpetrates a quote mine of Darwin:

Part I: Letter of Introduction: Why This Student's Guide?

Welcome to College, Goodbye to Intelligent Design?
The famous Pink Floyd song that laments, "We don't need no education / We don't need no thought control," is not just the rant of a rebellious mind; it is also a commentary on the failure of education to teach students how to think critically and evaluate both sides of controversial issues.

Few scientists understood the importance of critical thinking better than Charles Darwin. When he first proposed his theory of evolution in Origin of Species in 1859, Darwin faced intense intellectual opposition from both the scientific community and the culture of his day. To help restore objectivity to the debate over evolution, Darwin wisely counseled, "A fair result can be obtained only by fully stating and balancing the facts and arguments on both sides of each question." [Emphasis in original]

Let's not forget that the Darwin they are touting as someone who would listen to them is the same person that they've called a racist and an eugenicist (who would have probably advocated forced sterilization if only the technology was available in his day and age) and, of course, a person whose ideas lead to Nazism and the Holocaust.

But what about that quote? Here it is in context, with the quote-mined part in bold:

This Abstract, which I now publish, must necessarily be imperfect. I cannot here give references and authorities for my several statements; and I must trust to the reader reposing some confidence in my accuracy. No doubt errors will have crept in, though I hope I have always been cautious in trusting to good authorities alone. I can here give only the general conclusions at which I have arrived, with a few facts in illustration, but which, I hope, in most cases will suffice. No one can feel more sensible than I do of the necessity of hereafter publishing in detail all the facts, with references, on which my conclusions have been grounded; and I hope in a future work to do this. For I am well aware that scarcely a single point is discussed in this volume on which facts cannot be adduced, often apparently leading to conclusions directly opposite to those at which I have arrived. A fair result can be obtained only by fully stating and balancing the facts and arguments on both sides of each question; and this cannot possibly be here done.

Contrary to the implication arising from the period the DI inserted where none existed, the quote-mined part was not a complete thought. Darwin was not saying that every alleged theory has to be weighed before a fair scientific result can be reached. He was saying that he had many more facts in support of his theory but could not fit them all in the scant 490 pages he had at his disposal in the Origin.

One aspect of "critical thinking" is that, if someone has lied to you from the outset, you probably shouldn't believe anything else they say without a whole lot more evidence ... something that ID is distinctly missing.
.

Comments:
I'm not so sure about your reading of that passage. It seems to me that Darwin was trying to say that he won't have enough place to thoroughly anticipate and address every possible objection to his theory. In other words, he would make his case and leave it to his opponents to voice most objections.

Casey's description of the context to the quote (which was already in the first edition, before there was any public controversy over evolution) is still terribly wrong, of course.

No, I don't think so. Darwin was defensive about the Origin because he felt it wasn't a complete enough account of his evidence for his theory. He always planned to write his "big book" but never completed it (though a version of it has been published not too long ago). I think the lead-in to the quoted phrase -- talking about leaving out so much evidence and that some facts only "apparently" lead to conclusions opposite to his own -- makes it clear that he thought he had enough evidence to carry the day if it was all heard. But you're right that it makes no difference to the dishonesty of the quote mine.

It's also worth pointing out that Darwin was, so far as I can tell, somewhat defensive about not presenting all possible evidence because the prevailing model in his day of scientific reasoning was the inductive method pioneered by Bacon. By contrast, Darwin's reasoning is closer to the hypothetico-deductive model which today is the dominant model of scientific procedure.

So that students may have a clearer understanding of the honesty and objectivity of the authors of this guide perhaps they should be provided with a copy of of one of their policy documents such as the one which announces their "Governing Goals to be:

* To defeat scientific materialism and its destructive moral, cultural and political legacies.

* To replace materialistic explanations with the theistic understanding that nature and hurnan beings are created by God.

Unfortunately, most of my students would take one look at the "Wedge Document" and sign up right away. There are downsides to teaching in Texas . . .