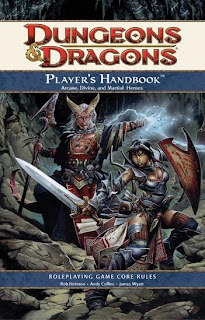 David Klinghoffer has a strange defense of his anti-scientism.

It seems that religion fulfills for adults the role that Dungeons & Dragons fulfills for 8 year olds, like his son: it provides "enchantment."

Science and reason, you see, suffers from "the dullness, the flatness, the aridity of the evolutionary picture of how the world works," while religion caters to "our intuitive sense that something else, something more, lies behind and somehow all around the façade of ordinary material reality."

He derides Richard Dawkins for using such words as "beautiful," "exciting" and "startling" to describe scientific discovery but that is nothing but question begging. Because Klinghoffer finds the facts of the material world as "flat as a lead pancake" does not mean everyone has to. There is every bit as much "enchantment" in exercising one's mind and discovering how the material world works as there is in pretending to be an elf or a wizard ... or in expecting a larger version of one to show up in the real world.
In any event, it is not an all or nothing choice, as Ken Miller and many other scientists know.

Rather amazingly, Klinghoffer admits that the same feeling of "enchantment" that drew him to D&D also drew him to Judaism and says:

For me, the fantastic dimension of Judaism points to another side of reality that our dry, desiccated secular age hates and denies. It reminds me that this pancake-flat world that Richard Dawkins prefers to imagine is not all there is. At least it's not all there may be. That gives me hope, and that is why I love it.

In short, he hopes against hope that science is wrong so he can go on playing his game of Dungeons & Dragons, Religion Edition, for ever and ever.
.
Link - Posted by John Pieret @ 8:07 PM

Comments:
John, this was very funny. Keep up the good work!

Glad you enjoyed it.

So religion is right because it makes you feel good?

Santa makes me feel good too, but that doesn't mean there is a minion of elves slaving away in a non-union factory up yonder all headed by the big man.

I gave up my belief in the white guy with the long beard as a child. Why do so many people have trouble giving up their belief in the other bearded white guy?

I gave up my belief in the white guy with the long beard as a child. Why do so many people have trouble giving up their belief in the other bearded white guy?

And what if your god is brown, has six arms and stands on one leg?

Yeah. Except when he takes to channeling Hitler for his views on "Darwinism" and quote mining various nuts to show that science makes people evil, he is probably the most honest of the Discoveryoids ... quite possible because he understands so little about the science/ID divide that he doesn't know when and how to lie effectively. And, of course, being the most honest person at the DI is akin to be the most honest person at a grifter convention.

His argument that one needs mysticism to feel fulfilled seems pretty silly. He probably needs a degree in the humanities. I get that weird giddy feeling that sounds close to mysticism when I hear a perfect piece of music (thus, why I majored in music). It doesn't mean I feel the need to worship it or find my "morals" in music. I just react very strongly in the emotional sense to some pieces of music. I've seen some others turn rapturous over art, poetry, and theater. It seems to me that those who need religion just have dull enough senses that they can't possibly feel good about anything in this world. Maybe their childhood development was stilted to where they couldn't get that feeling? Seems like they're on par with drug addicts. They have a hole to fill and refuse to admit that they have a problem.