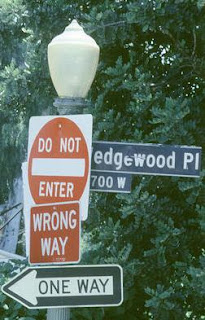 As Glenn Branch kindly pointed out in a comment a few days ago but that I'm only getting around to now, Brian Leiter has expanded on his criticism of Thomas Nagel's decision to lend his prestige to the public relations hacks at the Discoveryless Institute:

I can sum up my actual position in two propositions:

(1) It was extremely irresponsible--a product of some mix of ignorance, arrogance, and laziness--to endorse and thus give crediblity to an incompetent and misleading book, something no one informed about the issues would have done (that was the point of most of the links in my original posting).

(2) Nagel's irresponsibility on this score is especially reprehensible in a context in which his fame, and the credibility he has tried to confer on a snakeoil salesmen, will obviously be used for pernicious ends, in this case, undermining the biology curriculum in the public schools, which is the raison d'etre of the Discovery [sic] Institute and its conmen.

The much harder cases, on which I took no position, would be those in which something like (1) doesn't hold, that is, where philosophers are staking out and arguing for defensible positions on the merits, but doing so might have deleterious consequences for others. (The issue arises more often in science, and what the right answer is is tricky--see, e.g., Philip Kitcher's paper on "The Ends of the Sciences" in The Future for Philosophy volume I edited [OUP, 2004] for a useful discussion.) In general, considerations pertaining to the values of academic and intellectual freedom should counsel in favor of a wide latitude for subjects and methods of scholarly investigation. As I noted in the earlier item, commenting on Nagel's letter:

No one objects to challenging the explanatory completeness of physics, or to asking whether physicalists can explain consciousness, or whether naturalism is the correct meta-philosophy (lots of philosophers, as we recently learned, reject it, yet you can count on one hand the 'target' faculty who would pal around with the ID conmen at the Discovery [sic] Institute). What people are objecting to is lending credibility to individuals and groups whose goal it is to undermine the integrity of biology education for children.

But the latter is all Nagel has accomplished by irresponsibly endorsing bad work by an intellectually dishonest person.

There have already been a spate of Intelligent Design creationists taking advantage of Nagel for propaganda purposes, of which David Kinghoffer is only the latest. To see the pernicious effect of such PR tactics, one need only cast one's mind back as far as early 2009 and the use that was made of New Scientist's "Was Darwin Wrong" cover by the anti-science forces on the Texas State Board of Education to water down the science curriculum there.

Of course there can be serious academic discussion of thorny problems. And serious scholars should be able to defend unconventional and even unpopular positions with no more harm to their reputations than what they garner from the quality, or lack thereof, of their arguments. But if you want to, say, dispute common wisdom on the roots of the Holocaust, you don't do that by taking to the popular press to issue an endorsement of a deceptive book by some Holocaust denier.
.
Link - Posted by John Pieret @ 11:31 PM