The Confluence of All Lunacy 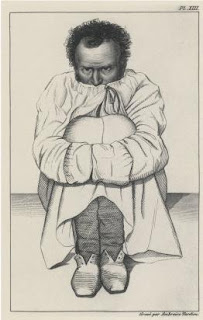 That would be the ever ridiculous WingNutDaily and, in particular, the even more ridiculous Ellis Washington, who "graces" its virtual pages. His latest screed, "Darwin is freezing over," really has to be seen to believed. The manner in which he connects Anthropogenic Global Warming, evolution, humanism and "shyster lawyers" is truly a textbook case of muddled thinking, the engine of which is willy-nilly correlation without any attempt to demonstrate causation, as exemplified in this:

In America we have record-shattering snowstorms and cold fronts from Florida to Alaska. Presently there is snow in 49 of our 50 states. Global-warming patron saint Al Gore is nowhere to be found because he knows he would be laughed to scorn at any venue where he appeared. Even a Senate committee hearing discussing the impacts of global warming was canceled last week due to record-breaking snowstorms in America's capital.

Ordinary citizens can just look out their windows and see that the premise behind anthropogenic (man-caused) global warming is a complete deception that the United Nations has wasted untold hundreds of billions of dollars funding.

Of course, weather is not the same as climate (though sometimes lay people on the other side of the "debate" can make the same error, as in proclaiming a particularly bad hurricane season as evidence of warming). There is good reason to expect snow to get worse, at least for a time, as the planet warms. But there is no need for Washington and his ilk to actually examine the evidence because their minds can only go directly between their prejudices and their conclusions, with only the briefest stopover to visit anything approaching "fact."

And, indeed, if no, even faux, fact exists, they will simply fill one in, as Washington does when he calls Darwin "an unremarkable British naturalist." In fact, Darwin was a well-respected naturalist with a reputation for important and careful work long before he published the Origin, which was one of the reasons his theory (as far as common descent was concerned, though not natural selection) was so quickly accepted by the scientific community. And when made-up facts are not enough, there is simply name-calling, as where Washington calls Darwin's theory "diabolical."

But the bottom line is this from Washington:

I cannot help to see this manmade climate change scam being our modern-day equivalent to Charles Darwin's theory of evolution 150 years ago, which I consider scientific mythology or fairy tales for adults.

Washington is exactly correct about that ... just not in the way he thinks he is.

P.S. As the Sensuous Curmudgeon has reminded me, Washington starts out with a quote mine of Darwin:

… I am quite conscious that my speculations run beyond the bounds of true science. ... It is a mere rag of an hypothesis with as many flaw[s] and holes as sound parts.

You can go to the Quote Mine Project to see the context.

I had noted the quote mine and intended to comment on it but, after such a concentrated dose of stupidity, even my brain, well-acclimatized as it is to creationist bafflegab, can become stunned and unresponsive.
.

Comments:
OT, but since you mention the QMP, I thought you'd like to know that it came in handy the other night, when several of our local humanists went a few rounds with a creationist, on a phone-in show, then after on our blog:
http://humanistottawaweb.wordpress.com/2010/02/16/need-to-rally-humanist-minds/#comment-585

The QMP (and the rest of the t.o archive) are a fantastic resource for rationality, and everyone involved should feel very proud of themselves.

Thanks. Now that my year-long-plus problem is over I'll see if I can work in some time to revive the updating of the QMP, if I can find someone willing and able to do the html work.

I keep telling folks that snowfall is measured in inches, not in degrees, but they don't listen.
It may be muddled thinking, but in Wingnuttia it is considered quite normal. It's all part of the Grand Conspiracy led by Muslim alien pretend president Obama.

You know what, we should really look in to hiring professional brain massagers. Nothing aches quite like a brain that's been whacked by creationist whackaloons.