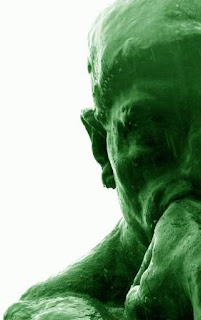 Jerry Coyne has admitted that he is no philosopher.

For some strange reason, he still insists on proving it.

This time the occasion for doing so is his response to something Massimo Pigliucci (a real philosopher) wrote about Sam Harris' attempt to draw an "ought" from an "is" (which Chris Schoen at u_n_d_e_r_v_e_r_s_e has a good take on). Specifically, Coyne disputes Pigliucci's statement that:

Dawkins and Coyne ... insist in applying science to the supernatural, which is simply another form of the same malady that strikes Harris: scientism, the idea that science can do everything and provides us with all the answers that are worth having.

Virtually every religion that is practiced by real people (as opposed to that espoused by theologians like Karen Armstrong) makes claims that God interacts with the world. That is, most religions are theistic rather than deistic. And to the extent that a faith is theistic, it is amenable to empirical study and falsification—that is, it's susceptible to science. (Bold in the original)

Coyne then gives a list of things which he thinks show that "science already has tested the supernatural," about which much could be (and, perhaps, in the future, will be) said. Suffice it to say that science can address some empiric claims made by adherents of religion but the issue remains whether it can test the "supernatural."

But what interests me here is what I want to call "the reverse argumentum ad populum fallacy." Let's look at Coyne's bolded statement above. Assume for a minute that we take a survey of American nonscientists who accept the theory of evolution and then determine, in detail, their understanding of the actual science. If we were to then compare that to the empiric evidence, would their understanding hold up? I rather think not.

If Coyne wants to appeal to the expertise of scientists, he cannot, without special pleading, deny the possibility of expertise in theologians.

In fact, Coyne wants to shoot only at the easy targets ... which should hardly give us confidence in his aim.
.

Comments:
Excellent. But I will say in Jerry's defense, he rightly holds James Joyce's story, The Dead, as the single greatest short story in the English language.

And he didn't arrive at this declaration by way of a lab test. There's hope for him!

... he rightly holds James Joyce's story, The Dead, as the single greatest short story in the English language.

I noticed that and agree with you.

But the claim that God interacts with the world is one that is made by the leadership of the religions. It is not one made up by the general population, they simply parrot it. Coyne is not making an ad populum claim, but one made by the religious leadership.

So your arguement fails (or am I missing something?)

But the claim that God interacts with the world is one that is made by the leadership of the religions.

Really? So the leaders of the Catholic Church, the largest in the world, claim that the earth was suddenly created, complete with all its species, 6,000 to 10,000 years ago; God put the earth at the center of the solar system; all humans descend from Adam and Eve, who also lived a few thousand years ago; and God confounded all the languages at once at the Tower of Babel? Indeed, how many leaders of religions actually hold to those sorts of claims?

In any case, that wasn't Coyne's argument. He is characterizing those sorts of claims as "supernatual" when, in fact, they are empiric. Disproving them does not go to the existence of the supernatural but only to the claims of some people about what the world is like. Some of the things on Coyne's list are closer to what most theists hold, but even in those instances there are objections to whether science can address them. What, for instance, is Coyne's scientific metric for what "benevolence" is?

Coyne's "real people" are just a section of religious people Coyne has singled out for his own purposes and if he can do that, then others can cut out the portion of people who accept science but do not understand it.

Really? So the leaders of the Catholic Church, the largest in the world, claim that the earth was suddenly created . . .

No. Neither I or Coyne claimed that.

Would the Catholic Church claim that God interacts with the world? Yes it would, and does.

He is not singling out a section of religious people in the statement you provided. It is a general statement about religions.

Therefore your argument ad populum fails. Because he is not confining the statement to a subset of religious people.

His statement is about a basic tenet of religions, handed down by the hierarchy, not something held by small groups. So it should be compared with the beliefs of the hierarchy of science, not the general population.

This is about your arguement ad populum claim.

Actually, he specifies a slew of them and the question is whether science can, in fact, test them. The ones I mentioned so far can be because they are empiric questions about how the world is.

Okay, I didn't want to get into this in the comments but here's a thumbnail:

Science has two great objectives. The first (and the lesser) is to determine if any given phenomena is real. So we can determine if the woman is presently suffering from lung cancer. That's not testing any supernatural claim, however, only the claim that she is "cured," which is made by human beings about the empiric state of the world.

The other great objective is to determine the causes of phenomena. The problem with this (pointed out by Hume a couple of centuries ago) is that we have no empirically testable experience of cause and effect. Science makes do with two "tests": correlation (which we all know is not, itself, equal to causation) and by what we call the "cause" preceeding the "effect." There are refinements to these, such as how consistent the correlation is and how close in time and space the cause preceeds the effect, but there no hard and fast "scientific test" of causation.

So let's assume the woman was in fact "cured" and is now cancer free. What could science test about the cause and effect? Well, we could look to see if there was some "natural causes" (a concept very hard to define) that would be sufficient to explain the cure. But even if there were, since we can't scientifically test what the cause really was, at most we would be able to say is that the cure is compatible with natural causes. That's where "methodological naturalism" comes into science. We philosophically assume that natural phenomena have natural causes. But that's not a scientific test.

So, no, you can't scientifically test whether the woman's cure was natural or miraculous, which is something many theologians and religious leaders grasp and the populum doesn't.

Coyne is not measuring the "truthiness" of religious ideas by popularity, he is making a statement that virtually every religion (that is practiced by people) is theistic. (As opposed to that some theological ideas practiced by some theologians are deistic.)

Comparing deist "theologians like Karen Armstrong" to the theist majority is not the same as comparing scientific experts to science-accepting non-experts. Deists are a minority in religion as a whole, not because of "truthiness" but because the sources (eg. bible) support a theistic view. Your analogy is flawed because Coyne is only comparing a minority view held by some "experts" to a majority view that is held by most religious followers and other "experts" (ie. theistic theologians).

No, he is claiming that the "supernatural" is disproved by science and measures the supernatural by what most religionists believe. If he wanted to say that most claims by a particular subset of religionists (even if the majority) about the empiric world was false, then he is floating a non sequitur in response to Pigliucci's point. If he is measuring the "supernatural" by the common understanding of theists, then he is making a reverse ad populum argument.