This Could Take Awhile 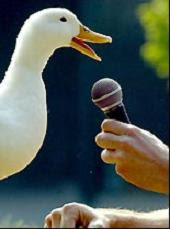 Orac has the story of the "favored laboratory of anti-vaccine practitioners and the 'autism biomed' movement, a commercial laboratory known as Doctor's Data," suing Steve Barrett, who maintains the excellent resource Quackwatch.

I have the Complaint in Word format and OCRed pdf format (but that's 14 MB and is hard to email). Anyone who wants a copy and asks nicely, I'll be happy to send it to you.

It's late and there is no way I'm getting through 43 pages.

However, in writing complaints, motions and briefs, I always try to lead with my strongest argument because judges (and, more importantly, judges' law secretaries) are subject, as we all are, to MEGO. The following is a summary of what DDI's first factual claim against Dr. Barrett:

[Barrett's article, "How the 'Urine Toxic Metals' Test Is Used to Defraud Patients"] ... falsely [exclaims] that Doctor's Data "caters to nonstandard practitioners." While the term itself is virtually meaningless, it has a seriously negative connotation and is meant to insult and denigrate Doctor's Data, whose clientele is diverse and impressive, and includes governments and universities as well as physicians and other health care practitioners.

[The article] is also meant to interfere with Doctor's Data in, and to cause damage to, its business by driving away clients who do not want to be labeled, or thought of, as "nonstandard" for having employed Doctor's Data to analyze their tests and samples.

If that's the best that DDI has, this suit is not long for this world.

As I explained in my post about the the suit by the doyen of the anti-vaccination movement, Barbara Loe Fisher, against Dr. Paul Offit, under US libel law, specific words must be alleged that make a factual claim about a person. Complaining that you are described as part of a class of people who are irrational, uneducated, unscientific, controlled by fear and/or a danger to public health is not enough to allege defamation under US law.

So, saying that someone is "catering" to "nonstandard practitioners" is not good enough. Not only is that not a factual claim, but no reasonable person could interpret that as anything other than a statement of opinion, which is fully protected speech under the First Amendment. As I pointed out before, even calling someone a ""pathological liar" is protected speech, so it is hard to see how calling someone a 'caterer' could rise to the level of defamation.

Strangely, DDI acknowledges that, by saying that what it is complaining about is "virtually meaningless." The fact that people express opinions, otherwise meaningless, about you that you perceive have "negative connotations" is simply not actionable in the US ... that is, essentially, the definition of 'freedom of speech.'

The claim of interference in the business of DDI is more complicated and will have to await some more consideration.

But if the above is any measure of the Complaint, it is clear that this case is not serious and only amounts to a an attempt to intimidate Dr. Barrett. As such, I strongly encourage donating to Dr. Barrett's defense!
.
Link - Posted by John Pieret @ 12:08 AM