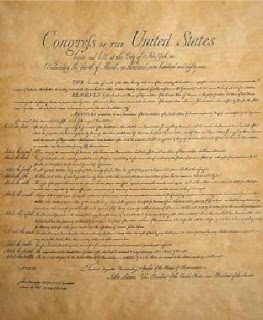 Another small step towards a rational and truly free society.

In twenty years, the vast majority of Americans will scratch their heads about why there was any controversy about it at all. Like a racially integrated military or the right of people to marry those of another race or the right and duty of women to serve in the armed services, it will seem like a holdover from times long past and it will come as a shock how long this prejudice persisted. Those who continue to oppose it will, in the future, be viewed as the same sort of fringe lunatics as the Ku Klux Klan and neo-Nazis.

Contrary to what John McCain asserts, we are not doing "great damage" to our military, we are undoing great damage to the ideals of America. There may, indeed, be some "growing pains" involved. But imagine what America would be like if we shrank from the difficulties of increasing human freedom! If McCain was in the Continental Congress, what would be his counsel on the dangers of taking on the greatest empire in the world? How would he react to the Emancipation Proclamation? Or the sending of Federal troops to Little Rock to enforce integration?

It is worthwhile to review this wonderful editorial by Ted Olson, a conservatives' conservative, in the slightly different context of gay marriage:

We once tolerated laws throughout this nation that prohibited marriage between persons of different races. California's Supreme Court was the first to find that discrimination unconstitutional. The U.S. Supreme Court unanimously agreed 20 years later, in 1967, in a case called Loving v. Virginia. It seems inconceivable today that only 40 years ago there were places in this country where a black woman could not legally marry a white man. And it was only 50 years ago that 17 states mandated segregated public education -- until the Supreme Court unanimously struck down that practice in Brown v. Board of Education. Most Americans are proud of these decisions and the fact that the discriminatory state laws that spawned them have been discredited. I am convinced that Americans will be equally proud when we no longer discriminate against gays and lesbians and welcome them into our society.

Reactions to our lawsuit have reinforced for me these essential truths. I have certainly heard anger, resentment, and hostility, and words like "betrayal" and other pointedly graphic criticism. But mostly I have been overwhelmed by expressions of gratitude and good will from persons in all walks of life, including, I might add, from many conservatives and libertarians whose names might surprise. I have been particularly moved by many personal renditions of how lonely and personally destructive it is to be treated as an outcast and how meaningful it will be to be respected by our laws and civil institutions as an American, entitled to equality and dignity. I have no doubt that we are on the right side of this battle, the right side of the law, and the right side of history.

Comments:
I think McCain's self-styled maverickism was always way overblown, so I long ago gave up being disappointed in the guy. Certainly since he lost to Bush2 in 2000 he's been a man with no discernable principles except his own personal ambition.

John, I need to correct you on one thing from the second paragraph:

"In less than a year, the vast majority of Americans will scratch their heads about why there was any controversy about it at all."

If that's most Americans, I'd agree, but the Righteous Right will take longer to let it go.

If McCain is now a spent force who can the Rethugs turn to except Sarah Palin? Ye gods! What is me sayin'?