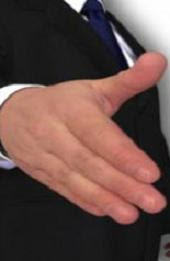 Look who admits that a respectful discussion of views with theists can teach him something:

People like Elaine Ecklund are always urging scientists to "dialogue" with the faithful, expecting that it will benefit both of them. (What people like her really want, of course, is not benefits to science but more tolerance of religion.) I haven't been averse to such dialogue. ...

Before I showed up I had resolved to keep pretty mum about my views on religion—after all, I was addressing twenty religious people who were kind enough to buy and discuss my book. But that resolve lasted only about thirty seconds! How could I sit by when people made the familiar arguments that science and faith are separate magisteria, that atheism and science were responsible for Nazi Germany, that parts of the Bible were metaphorical fictions while others weren't, and so on? To not say my piece would have been intellectual dishonesty. But, to be sure, I tried to be calm and respectful. ...

I did learn a lot. Here are some of my outtakes:

• Because the church members were liberal, urban Methodists, apparently well off, they were obviously not raving fundamentalists. Their approach to faith was far more "nuanced" (I hate that word!) and circumspect. Several of them struck me as being a hairsbreadth from atheism, seeing God as some kind of distant entity who neither concerns himself with the world nor was even involved in creating it. In fact, they spent a fair amount of time denigrating fundamentalists like Southern Baptists, reassuring me that they disliked those folks more than I did!

• It was obvious that for these folks, one of the most important aspects of church membership was a sense of community—and the opportunity to do something to help other people. The church has various intellectual activities (like the reading group), outreach programs like an ecology group, and it feeds the homeless. All of this is obviously good: this is one of those churches for which it's hard to say that, on balance, they create more harm than good.

One has to wonder how open Jerry was to dialogue with theists before, if he is just now learning that some of them are liberal, urbane and not only not raving fundamentalists but opposed to such views; that they value community over evangelicalism, learning over dogma, charity over conformity.

Now, the definition of "accommodationism" has proved slippery, to say the least. But the notion that having a respectful, but no doubt vigorous, dialogue could teach a Gnu Atheist a lot, sounds like a good enough reason to expend the minimal effort involved.

Update: Josh Rosenau noticed my post and had some fun with Coyne. The comments are interesting in that the NCSE is seemingly being criticised for talking about religion or with religionists unless it takes the same line that Coyne does: that they are incompatible with science. Anything less is "patronizing" ... thus assuming that everyone from the science "side" has to agree that they are, even among the sort of liberal theists Coyne seems flabbergasted to discover. It is a puzzlement.
.
Link - Posted by John Pieret @ 11:58 AM

Comments:
"My own strategy for promoting evolution, I said, had evolved into trying to “get rid of religion,” which is the source of creationism, and far worse things besides. I believe that statement shocked some folks, but I hastened to add that the types of religion I was most concerned with eliminating were those that promoted Biblical literalism or had invidious effects on society, like promoting suicide bombing, repression of women, and prohibition of birth control. I doubt that these Methodists fit into those categories!"

Of course a few of the commenters over there are nonetheless doubling down on the "But religionists are still all poopy-heads!" theme.

Sure: religion is at best false, most of it silly or worse, we can probably get along without these beliefs, and the sooner we get on with it the better off we'll be. But good grief.

I'm glad to see Coyne finally getting on board with talking to the faithful rather than talking about them to others. Several of the things he says do indeed sound remarkably like viewpoints and opinions he has persistently chided in the past. Regardless, it's good to see a productive discussion with a religious group, no matter the position of the speaker.

I'm also surprised at the bewilderment some of the post exudes at believers being nice, intelligent people. It's as if, despite several years of attacking them, Coyne had had little to no interaction with "moderate" believers prior to this particular visit.