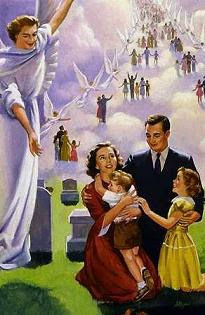 Well, it's the big day, when we're all goin' Camping!

As you may know, God, as an orderly being who wouldn't want His Elect caught unawares, is arranging for the Rapture to occur at 6 p.m. local time all around the world. Naturally (or, rather, supernaturally) the Rapture will be accompanied by gigantic earthquakes. Consider how lucky we in America are (God has always loved us Merkins). We'll have some 18-21 hours after the first reports of the devastation rolling from east to west to "get right with the Lord."

As close as I can figure (I'm sure God will be able to work out where in the world daylight savings time is observed and where it isn't, but I can't), the Rapture will begin in the first time zone west of the International Date Line at 2 a.m. Eastern (U.S.) Daylight Time.

So, if my fellow East Coasters are wise, after sleeping in a bit and maybe a leisurely breakfast, they'll tune in the news to see how things are going in, say, eastern Africa.

Comments:
Well, it's just before midnight here in ND. I put a message on Facebook asking contacts in the UK how things were going there but I haven't heard anything back yet. Could this be a cause for concern?

It appears that New Zealand, virtually Ground Zero of the Rapture, is still with us. Of course, the report might be a deception by the Father of All Lies ... The Telegraph.

Wait, how old do they think the world is? I am starting to have my doubts on this whole rapture thing.

It's 13 here in Denmark and no reports of earthquakes in the east, perhaps a worldwide conspiracy of suppressing the news? I'll know in 5 hours