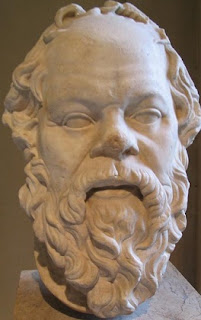 PZ Myearshertz and Jeffrey Shallit have already justly excoriated William Lane Craig for his “defense” of God ordering the Israelites to kill children and infants. Craig's “excuse” for God is:

… the death of these children was actually their salvation. We are so wedded to an earthly, naturalistic perspective that we forget that those who die are happy to quit this earth for heaven’s incomparable joy. Therefore, God does these children no wrong in taking their lives.

Gee, do you think God could have then told the Israelites to use a method of “salvation” less painful and terrifying than running them through with swords or bashing their heads against walls? But Craig's God always was a bit of an incompetent.

Geek that I am, however, what interested me was Craig's answer to the Euthyphro dilemma, which asks "Is what is morally good commanded by God because it is morally good, or is it morally good because it is commanded by God?" The first horn of the dilemma is: if God commands good because it is good, then there is an independent moral code to which even God is subject and, therefore, he/she/it is neither the supreme authority on morality nor omnipotent. The second horn is: if the good is good only because God commands it, then there is no such thing as “morality.” It is just God's arbitrary command … the whimsy or caprice of a despot. Craig prefers the second horn:

According to the version of divine command ethics which I’ve defended, our moral duties are constituted by the commands of a holy and loving God. Since God doesn’t issue commands to Himself, He has no moral duties to fulfill. He is certainly not subject to the same moral obligations and prohibitions that we are. For example, I have no right to take an innocent life. For me to do so would be murder. But God has no such prohibition. He can give and take life as He chooses. We all recognize this when we accuse some authority who presumes to take life as “playing God.” Human authorities arrogate to themselves rights which belong only to God. God is under no obligation whatsoever to extend my life for another second. If He wanted to strike me dead right now, that’s His prerogative.

Of course, Craig's “out” of the dilemma is that bit about “a holy and loving God,” which is somehow supposed to protect us from whimsy or caprice. Craig does no favors to his argument to recite the tale of Abraham, like a “Middle Eastern merchant haggling for a bargain,” getting God to promise to spare Sodom and Gomorrah if there are even ten righteous persons in the cities … which God presumably already knew one way or the other.

But, wait a minute! How do we know God is holy and loving? Why, God told us so in the Bible!

So, where did God get the moral duty to tell us the truth?

By Craig's own “reasoning,” we have no warrant to believe the Bible is anything other than a pack of lies told by an evil imp.

And given Craig's defense of infanticide, I think that is a much more reasonable interpretation.
.
Link - Posted by John Pieret @ 3:27 AM

And, of course, those are exactly the grounds on which Craig should be attacked in one of those spectator sport events that pass as public debates.

He relies on his scientist opponents to attempt a calm and rational explanation of science. He apparently seizes the moral high ground by feigning pained surprise that anyone could be so foolish as to attempt to defend the indefensible. The proper counter is to cap it by expressing absolute outrage that a Christian could attempt to defend the appallingly immoral behavior of God and His chosen people as described in the Bible and astonishment that anyone could even contemplate it being a better alternative to the moral standards by which we judge it. The Dilemma and the logical contradictions implied by a tri-omni God can be used as supplementary arguments but they should not be the main line of attack.

Not at all! Belief is a noble thing. If people believe that witches should be burnt at the stake or the Earth is the center of the Universe and only 6000 years old or that gulags and concentration camps are a Really Good Idea or that Donald Trump would make a great president then those beliefs should be respected because....what? Because they are beliefs?

Or could it be neither?

Is that meant as sarcasm? Because it happens to be true (other than the "immediately" bit, which I would replace with "after a reasonable period of due consideration and counter-argument has failed to resolve the issue in their favour" -- a condition which applies in spades to Craig's apologetic for Biblical genocide).

How dare they try to defend something they believe in!

Of course they can! And anyone has the right to dare to assess how successful they are at it. I dare say that Craig has delivered an epic fail.

Whether the failed defender gives up his or her beliefs immediately and walks away or does it, as Eamon says, "after a reasonable period of due consideration and counter-argument has failed to resolve the issue in their favour," or never does it at all, is rather unimportant.

I don't expect to convince the likes of Craig, who could deliver such a lame "argument" in the first place. He is too invested in his delusions to abandon them.

The point is to educate those who are not yet besotted.

Actually, I'd like to see Craig take on Rabbi Rachel Mikva. She teaches a class in Chicago called "Dangerous Religious Ideas." I heard her speak a few weeks ago - fantastic.
Mikva would TKO Craig - no bandying about, maybe it's OK for the reader to read bible stories like that and disagree with what it seems that god is ordering, that that's actually the point of the story.

Incidently, I am reminded of Richard III:

Go, tread the path that thou shalt ne'er return.

Simple, plain Clarence! I do love thee so, that I will shortly send thy soul to heaven.

... If heaven will take the present at our hands.

And that is just the point! As soon as you point out such horrible things, it becomes a game of cherry-picking which parts of the bible one believes and disbelieves, based solely on what one finds attractive.

You, of course, have statistics to back that claim up. Or are you just making it up as you go along ... like Craig?

As soon as you point out such horrible things, it becomes a game of cherry-picking which parts of the bible one believes and disbelieves, based solely on what one finds attractive.

Craig's position is that divine command theory is rationally acceptable if we take as a premise that God exist and is necessarily good. But he does not take the Bible as supplying us with reasons for endorsing this premise. Rather, he endorses a version of the cosmological argument (more specifically, the Islamic version or kalam argument).

How does the kalam argument argument get him to the conclusion that God is necessarily good?

I don't know. I'm worried about that myself. And I haven't read much of Craig's work -- in fact, the only essay of his I've read carefully and in its entirety is The Indispensability of Theological Meta-Ethical Foundations for Morality.