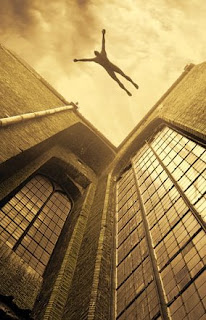 Well, the Giles County School Board has gone and done it by a 3 to 2 majority: it will order "historical" displays installed in its schools that include the Ten Commandments.

There were some interesting things in the report in The Roanoke Times:

"This issue creates a great conflict between what is in my heart as opposed to my mind," [Board member Lewis]Webb said after the vote. "I took an oath to uphold the Constitution of this great country. ... Personally, I feel this issue violates the Constitution."

Well, hooray! At least one local official takes his oath of office seriously.

Not so much some others:

Giles County supervisors Chairman Eric Gentry said his board, which provides the school district funds each year from tax revenue, has no stance on the matter.

He supports the commandments in schools and the district going to court.

"The trick there is not to lose," he said Wednesday. "We've got a long way to go before anything happens at all."

You may remember that Gentry was singing a somewhat different song not long ago at a previous board meeting:

Now let me speak to you as Eric Gentry, as a Chairman of the Board of Supervisors of Giles County. I talked to all of my board members last night and today. Don’t remove them. We are behind you. We would rather fight the ACLU or whoever would come up than have one anonymous coward who would not even sign the letter come in and tell us how to run our schools. I don’t know how it’s going to turn out and don’t know if it’s going to go that far, but you know you have our support as county people and citizens.”

If the board members detect the faint smell of politicians burning rubber while backing up, wait until this all goes wrong and the school district winds up with a whopping big judgment against them for the plaintiff's legal fees.

Charles C. Haynes, a prominent First Amendment scholar, calls it "a close case" but I think he is being kind to the rubes. He notes that the pro-commandments outpouring from churches and hundreds of citizens will be a factor before the court and "[i]f we all know what's really going on here, the court will look at that." In other words, if it can be demonstrated that this is about promulgating religion in public schools, the district will lose.

But all you have to do is look at the minutes of the board meetings I've already linked to (indeed, every meeting, beginning on January 20th and going through May 19th, except for April 12th, dealt with the Ten Commandments issue to a greater or lesser extent) to see what the motives of the members of the board are ... at least the ones who don't care about their oaths. Mr. Webb will have Buckingham-ish difficulty backing out of his statement about the unconstitutionality of the decision and his testimony is likely to be most awkward for the board.

The board hasn't posted the minutes of the June 7th meeting yet but I wouldn't be a bit surprised if there is more ammunition for the ACLU when they get around to it. In any case, I'm saving all those minutes just in case there is a memory hole accident.
.

Comments:
"until this all goes wrong and the school district winds up with a whopping big judgment against them for the plaintiff's legal fees"

Matt Staver's band of theocratic "lawyers" will also make out ... to the extent of being paid whatever they get paid.

Unfortunately, the real losers will be the children who will take the brunt of any financial losses.

Is there no form of redress against school authorities who harm students' education by recklessly and needlessly engaging in costly litigation? Surely, they have a duty towards the students to act responsibly and prudently in the management of the funds that are to pay for those students education.

Is there no form of redress against school authorities who harm students' education by recklessly and needlessly engaging in costly litigation?