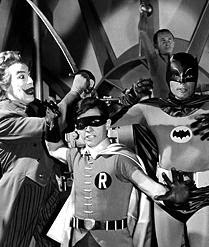 Kelly Kohls, a member of the Springboro, Ohio school board and Tea Party stalwart who wanted to have the local public schools teach creationism has had an epiphany and:

... revised her position on whether Springboro schools should teach creationism. She said parents should have the choice of using state funds to send their children to other schools if they want to learn about creationism and intelligent design. ...

"I would like to (teach it), but not necessarily at this public school. I think it is important we understand why we don't."

For starters, there's a little thing called the Constitution ...

Not that any Tea Partyer is gonna let that stop 'em:

Instead, Kohls would like to see expanded "school choice" and possibly vouchers for parents who want their children to learn about such topics, she said. Vouchers, which use state money to send students to parochial or private schools, are only available to parents in low-performing districts. Springboro schools are rated excellent.

Oh, wait a minute! That would mean that all those little Muslim boys and girls could use taxpayer money to be sent to a madrasah to learn about ... Sharia!

Comments:
NJ Governor Chris Christie, usually known for being a union-hating bully, came out with a statement that surprised many. He selected someone for state Supreme Court whose name was Mohammed, which drew the usual criticism from the rightwingers. Christie (http://crooksandliars.com/nicole-belle/credit-where-due-lawrence-odonnell-ap>) responded:

“Sharia Law has nothing to do with this at all, it’s crazy! The guy is an American citizen!” He concluded that the “Sharia Law business is just crap… and I’m tried of dealing with the crazies,” adding with disgust and frustration that “it’s just unnecessary to be accusing this guy of things just because of his religious background.”

I saw that. Will he ever be able to run for president as a Republican after that? I hope the adults can take back the party.