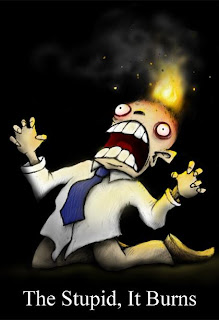 ... is being spread, once again, by Ellis Washington, a major intellectual arsonist.

His article starts with a quotation by the rather crazy Jerry Bergman; works through the ol' Darwin ==> Stalin ==> Hitler ==> all bad things bullhockey; and even touches on the incredibly ignorant/dishonest equation of the subtitle of The Origin with racism.

But this is what gets me:

Dawkins said of Perry: "It [evolution] is the stunningly simple but elegant explanation of our very existence and the existence of every living creature on the planet. Thanks to Darwin, we now understand why we are here and why we are the way we are. You cannot be ignorant of evolution and be a cultivated and adequate citizen of today."

Nothing in science is absolutely certain. Even today scientists are proving one of Einstein's bedrock theories to be false – that nothing can travel faster than the speed of light.

Washington is (very partially) right! Nothing in science is absolutely certain. But he also says:

The unholy trinity, Darwin-Lenin-Dawkins, and their intellectual children have carried the day in modern times because they control virtually every aspect of science, education, law, philosophy, politics, economics, culture and society.

But wait a minute! If the evil 'Darwinists' are so powerful as to control almost everything, how did they allow this example of the supposed utter frailty of science slip by? Given his own premises, Washington has no warrant to cite to scientists!

Of course, Dawkins did not say that evolutionary theory is "absolutely certain." He said that it is a stunningly simple but elegant explanation of life on Earth today, which is true, and that no one can be ignorant of evolution and be a cultivated and adequate citizen, which Washington has proven, once again, not to be.

More importantly, even if (a big if) it turns out that Einstein was wrong in that some things can go faster than light, it is almost certain that Einstein will have been right about most things not being able to ... just as Newton was right about the mechanics of most things, except those going at some significant fraction of the speed of light or located deep in a massive gravity well. Evolutionary theory is as likely to be completely overturned as the heliocentric theory of the solar system is and Washington is no better than those who hope it will be shown that the sun orbits the Earth.

Scientists are not embarrassed by this new data ... they are excited!
.
Link - Posted by John Pieret @ 7:49 PM

Comments:
Even today scientists are proving one of Einstein's bedrock theories to be false – that nothing can travel faster than the speed of light.
Washington does what may disingenuous persons and deniers of reality do--he states something that is not true as if it is not only true, but obviously true and known to every grammar-school child. As you suggest, faster-than-light speed is far from being proved by recent experiments, and continued research will improve our understanding, whether or not the recent experiment is verified.

The blatent part of it is that he cites very preliminary results of scientists to argue that scientists are somehow 'disproving' the reliability of science. Then why cite the scientists in the first place? ... other than as cheap rhetoric.

In my view, this, like the incessant science-bashing at Uncommon Descent, is a measure of how much they feel threatened. They see science as a rival belief system offering the same certainty of knowledge as that claimed by religion but fear it because it has a much firmer empirical foundation. This leads them to pounce on any apparent uncertainties or errors or perceived cracks in well-established theories as evidence that what they see as the whole ramshackle structure is in imminent danger of collapse.

I suspect most believers crave the certainties provided by religions and many simply cannot understand the scientific cast of mind which has been trained to grapple with uncertainties and probabilities. For believers, the overthrow of a major tenet of their faith would be a disaster and they cannot fathom how something similar in science could be welcomed as an exciting opportunity.

The good thing about this sort of conspiracy-mongering is, as you imply, that each such article published is evidence against its own central claim of an all-pervasive, all-powerful conspiracy to suppress the sort of view.

Ian, I think your take on certainties vs. uncertainties is exactly right.
Thing is, i don't think it's only a problem for believers. I suspect a desire for a final answer - a measure of certainty - led Hawkings to publicly embrace multiverse theory.
And I believe it's at the heart of my own disagreement with those describing themselves as new atheists. I think they exhibit a measure of certainty beyond that which is buoyed by the facts. And then they get in your face about it.
In that way, they raise my hackles just like religious fundamentalists. But maybe i'm just genetically predisposed to being contrarian ;)

@Ian
For believers, the overthrow of a major tenet of their faith would be a disaster
Depends who you talk to. For e.g. Original Sin is a big deal theologically but most moderate believers probably don't care.