God in the Headlights 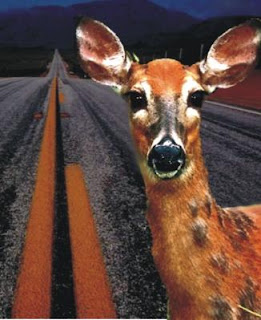 David Klinghoffer is busily signaling the faithful that Intelligent Design is, in fact, creationism while still pretending it is science. But this is funny:

God's humility appears to us as modesty or shyness, almost. I've tried to explain this to my kids in terms they can understand, referring them to the deer that sometimes browse in the blackberry bushes at the edge of our driveway. If we want to enjoy watching them, we have to be careful not to scare away our silent, beautiful deer with loud voices or sudden movements.

It's those dang noisy scientists that keep scaring away God:

This observation about God's personality may explain why the evidence of design in the world is elusive to many people. What my colleague Dr. Stephen Meyer calls the "signature in the cell" in the genetic code, in protein synthesis, in what biochemist Michael Behe calls irreducibly complex features of biology, in the Cambrian explosion and the rest of the fossil record, in cosmology, in individual types of creatures—from butterfly metamorphosis to the history of whale evolution—whatever piece of the argument for intelligent design that you think of, it is all very lightly imprinted. It takes patience and study to see.

Comments:
The presence of skeptical scientists also has a noted tendency to disrupt ESP and clairvoyance, to scare away the spirits at seances, to make N-rays stop, um, raying, to rob homeopathic preparations of their effectiveness, to, well -- just generally put the damper on every party they're invited to.

Damn these people. Best call in the pest control service from that recent Rick Mercer video.

I can think of many words to describe the God who killed the firstborn of Egypt, encouraged and condoned various crimes against humanity such as rape, slavery and genocide and finally wiped out almost all life on the planet in a fit of pique but 'modest', 'shy' and 'humble' are not amongst them.

So shy that he disguised all of his design of organisms as predictions of evolutionary theory.

Why, it's almost as if he didn't do anything visible at all!