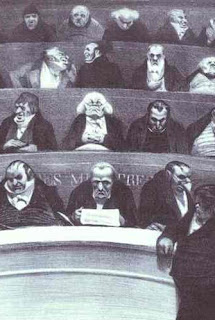 Heather L. Weaver of the ACLU makes justified fun of Tennessee legislators who are trying to pass a pseudo-academic-freedom bill:

In passing the bill out of the Senate Education Committee yesterday, legislators claim they have fixed the language so it is no longer problematic, but a simple comparison of last year's bill and the current measure shows that all the bill's sponsors have done is consulted a thesaurus. Instead of characterizing evolution as a "scientific controversy" that requires further critical analysis, the bill now deems evolution a "scientific subject[] that may cause debate and disputation," and that, therefore, requires further critical analysis. That's right — the grand legislative "fix" merely replaces the word "controversy" with its synonyms, "debate" and "disputation." There are no other substantive changes to the proposed law and it would have the same disastrous consequences for science education as the measure defeated last year.

... We can't help but wonder what it will take to make state legislators understand that undermining the teaching of evolution in order to promote religious beliefs like creationism and intelligent design in public schools is simply unconstitutional.

And then it hit us: Maybe we just aren't using the right word to explain it. So, in case any confusion remains, Tennessee legislators take note: Under the Establishment Clause of the First Amendment to the U.S. Constitution, your repeated attacks on evolution education are unlawful, illegal, illicit, impermissible, unauthorized, improper, prohibited, barred, lawless, banned, illegitimate, forbidden, unsanctioned, proscribed, and (something to always keep in mind) actionable. See, we have a thesaurus too, and we are not fooled when the legislature plays semantics with constitutional violations.

And over-priced at that.