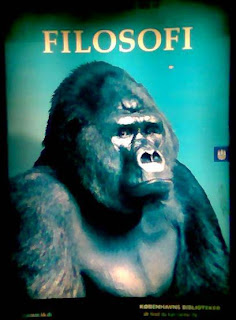 There is a group of Sophisticated Philosophers who, though a nonbelievers themselves, feel compelled to occasionally don the mantle of Sophisticated Theologian© and help the faithful find ways to comport their religion with modern science. Two specimens are Michael Ruse and Elliott Sober. ...

I'm not sure why atheist/agnostic philosophers want to spend their time harmonizing science with the very religious beliefs they reject. Sober, for example, doesn't believe in God-guided mutations, but goes around telling the faithful that God could help Darwin along by occasionally tweaking the DNA. And Ruse is a nonbeliever as well. I'm not a psychologist, so I won't suggest the motivations for this, but none of them seem savory to me. I could talk about "belief in belief," or early religious belief that, once rejected, still lingers, but who knows?

How about being intellectually honest about the limits of science? I'm not sure why Coyne wants to spend his time misrepresenting what science is and can do. I'm not a psychologist, so I won't suggest the motivations for this, but none of them seem savory to me. I could talk about "scientism," or early belief that science is a "worldview," but who knows?
Link - Posted by John Pieret @ 6:42 PM

Comments:
...so I won't suggest the motivations for this

I think it's called "tolerance".

If "tolerance" is delivered with snide ...

What limits of science had you in mind?

The ones Sober discussed and which I have discussed many times. The ones Coyne ignores when he repeatedly calls science a "worldview."

I was hoping for a more illuminating answer. I've read many of your posts previously, understood many of your criticisms, but I'm not sure what your aims were beyond defending philosophy. This may be down to my failure to comprehend your intent, so I wondered what your 'worldview' incorporated.

It's your blog, do as you wish.

Coyne, of course, pointed to Sober's points and, as you said, you've been around here for a long time (and welcome).

As for my "worldview," I could hardly give it in a blog post, much less a comment to one.

But here is some of it: I value knowledge. Science is, by far, the best source of knowledge that humans have. Science, however, is not the be all and end all of human knowledge. At the very least, art, literature, philosophy and the other humanities are "ways of knowing" (whatever that phrase is supposed to mean). I value other humans even if they do not agree with me. I reserve the right to make fun of them (the way I often make fun of myself) when they deny the value of knowledge but also recognize I have no privileged path to what is and is not "knowledge." I do not, myself, believe in a god that would make any difference in the way I live my life but cannot say there is no such god based on anything I would call "knowledge." Ultimately, I judge other people (as a rough approximation), first, by their treatment of others and, secondly, by their respect for what we do know through science. Ken Miller, for example, as far as I know, treats others well and respects science. That he goes beyond science to believe in a god I long ago abandoned is of no importance to me and, despite my own metaphysics, I will intellectually defend his right and correctness to hold that metaphysics in the face of the inability of science to contradict it.

Ah, thank you. I think I can see the background to your posts.

I'm always a little worried about the phrase 'other ways of knowing' because while it perhaps captures the importance and value of art, literature and philosophy it leaves open the idea that science is as amenable to subjective re-interpretation. I acknowledge that scientists work within their social settings but their findings should be objective...

I understand that the German language distinguishes between 'knowledge' and 'understanding' - perhaps that's the sort of distinction I am reaching for.

I wouldn't necessarily dismiss someone elses subjective views because they can't be objectively corroborated, but I would dismiss them if they were clearly counterfactual or harmful to others. There are obvious instances like belief in a flat earth. Rather less obvious cases like anti-vaccine beliefs. And as for religion - well there are so many to choose from.

I guess that I'll agree that the scientific method cannot know everything (some things will be unknowable), as long as long as 'the other ways of knowing' acknowledge that the values and meanings they discover are not infallible. But that is just my 'worldview'...

But that is just my 'worldview'...

How about being intellectually honest about the limits of science?
That works for me.

Jerry ascribes his personal beliefs to science. I prefer to distinguish between what science says and what individual scientists say.

I thought you got it exactly right in "Science and the supernatural."

Skepticism about religion is, I think, justified by more than just science. But it is important that we all keep our arguments straight.