The Good News of Christie 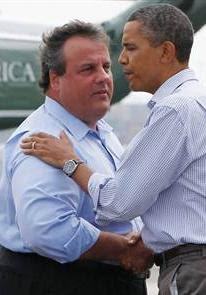 At least certain segments of the Radical Right have it in for Gov. Chris Christie of New Jersey. Take, for example, Robert Stacy McCain,* writing at The American Spectator:


The list of fools who have brought this disaster upon us certainly also will include New Jersey Gov. Chris Christie, the gelatinous clown who (a) hogged up a prime time spot at the Republican convention to sing his own praises; (b) embraced Obama as the hero of Hurricane Sandy; and (c) then refused to appear at campaign events in support of Romney's presidential campaign. Good luck with the remainder of your political future, governor. It is unlikely Republicans shall soon forget your perfidious betrayal.

Of course, thanking the President for helping the people of the state Christie leads is "perfidious betrayal." No doubt he should have turned down all that "big government" FEMA money and let the victims of Sandy prove that they aren't part of the "47 percent."

Chris Christie is, I think, at this early date, the most formidable candidate the Republicans have for 2016. If the Radical Right blocks his way to the nomination, the Republicans are likely to nominate a weaker candidate.

Don't get me wrong. From across the Hudson River, Christie appears to be a rational Republican who would probably make a decent president. The good news is that, if he gets the nomination, he likely won't be beholding to the wingnuts and could even begin the process of rescuing the Republican Party from being the John Birch Society 2.0.

There is a long way to go, of course, and Christie could start pandering to the knuckle draggers. But he is not the chameleon that Romney was and, in the worst case scenario, the Republicans will be depriving themselves of their best chance to win.
_______________________________

* What might make me think McCain is radical? Well ...


The American people -- or, at the very least, a sufficient plurality of them -- decided that they want another four years of clumsy policy failures and vengeful "progressivism," as Democrats nowadays describe their agenda for wrecking what remains of our constitutional republic. Even before the unmitigated political disaster of November 6, 2012, a date that will live in infamy, the prospects of salvaging the United States were not particularly hopeful. Now, however, we are permanently and irretrievably screwed.

It's a good thing he isn't hysterical.

Comments:
It's a good thing he isn't hysterical.

Yes, but maybe he and his kind will soon become historical.

but maybe he and his kind will soon become historical

Christie's approval soared because of his response to the storm. If he wins re-election, I suspect all the Republicans who hated him for touring the damaged areas with the President of the United States instead of a candidate seeking photo ops will support him in 2016. Especially if he resumes his anti-worker, penny-wise/pound-foolish behavior.