Not So Hidden God 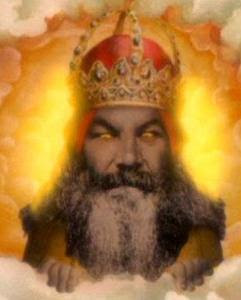 It seems the Discovery [sic] Institute is no longer trying very hard to hide the religious nature of ID. As usual, the DI is far more upset with "theistic evolutionists," in this case paleontologist Robert Asher, then it is with atheistic scientists ... upset enough to say this:


ID doesn't promote a theological doctrine that claims to explain God's actions in every instance. ID is a scientific theory that claims that sometimes we can scientifically detect design, and sometimes we can't. Just because we can't scientifically detect design in a particular instance doesn't mean that we've claimed, theologically, that God was entirely absent from that event or process. All theists who support ID affirm that God is behind, in some sense, every event. "Natural cause" never means (for theists anyway) "not caused by God." I'm not aware of any ID theorist who is also a theist and who has ever claimed otherwise. (Emphasis added)

So, the "Designer" is understood by ID "theorists" who are also theists (the vast majority of those "theorists") to be God. But we're all supposed to pretend that ID is science and not apologetics. Riiiight!

Comments:
I just watched the video Is it time for all religions to accept evolution?. And Asher was a very good (i.e. effective) spokesman for evolution there. It's easy to see why creationists and ID proponents don't like him.

Uncommon Descent and Cornelius Hunter have both posted the video, in order to complain about it. And Larry Moran has posted it for a better reason.

The pretense that ID is science seems to be hard for them to keep up.

Oof ... I started to watch that but the willful ignorance of the creationists was too thick on the ground to take. Gishisms galloped to and fro and supposedly creationist peer reviewed science articles were waived about without any attempt to elucidate just what they said.

In short, it was like a talk.origins thread done on the fly without any chance to check facts or give considered responses. It was, as far as I could stand to watch it, a classic example of why you shouldn't "debate" creationists.

Just because we can't scientifically detect design in a particular instance doesn't mean that we've claimed, theologically, that God was entirely absent from that event or process.

Which leaves open the question whether there is any example (even hypothetical) of something which is not "intelligently designed".

And thereby, leaves open the question about what difference "intelligent design" makes.

Hello. And Bye. Thank you very much.