On the Fourth Day of Darwin 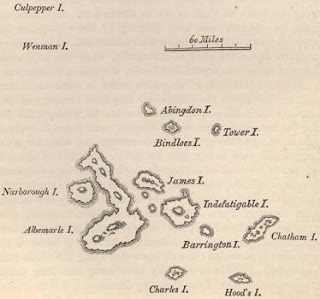 The entire surface of this part of the island seems to have been permeated, like a sieve, by the subterranean vapours: here and there the lava, whilst soft, has been blown into great bubbles; and in other parts, the tops of caverns similarly formed have fallen in, leaving circular pits with steep sides. From the regular form of the many craters, they gave to the country an artificial appearance, which vividly reminded me of those parts of Staffordshire, where the great iron-foundries are most numerous. The day was glowing hot, and the scrambling over the rough surface and through the intricate thickets, was very fatiguing; but I was well repaid by the strange Cyclopean scene. As I was walking along I met two large tortoises, each of which must have weighed at least two hundred pounds: one was eating a piece of cactus, and as I approached, it stared at me and slowly stalked away; the other gave a deep hiss, and drew in its head. These huge reptiles, surrounded by the black lava, the leafless shrubs, and large cacti, seemed to my fancy like some antediluvian animals. The few dull-coloured birds cared no more for me, than they did for the great tortoises.

- Charles Darwin, Journal of researches into the natural history and geology of the countries visited during the voyage of H.M.S. Beagle round the world, under the Command of Capt. Fitz Roy, R.N., 2d edition. London: John Murray.