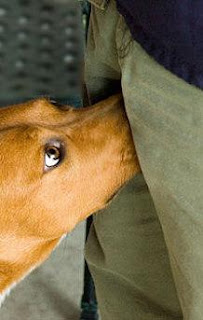 We have more on Dr. Jack Collins' colloquium at Greenville College, a Christian institution, about Intelligent Design.

Samantha Paulin, apparently a student at Greenville, reports on her experience at the colloquium.

First of all, she calls Collins "a renowned Intelligent Design proponent."

Really? Dang! I thought I knew most of them!

But Samantha may have answered that puzzle:


So what happens when one who supports this very idea steps onto the grounds of a Christian institution? I came into the colloquium and especially the discussion in class wanting him to come out and defend against the many critiques of Intelligent Design. ...

Dr. Collins presented his points of view towards both the natural and spiritual world, but nowhere did he attempt to push ID down upon us or desperately defend his beliefs. What he did do was lay out the facts, definitions, and ideas behind Intelligent Design, describe what it means to be a good theological theory, and show those present many of the quotes and views of the leading names in the fields of science and religion that came before him. [Quote mines, anyone?]

... Dr. Collins doesn't necessarily support 100 percent of the views that more conservative ID proponents believe in. He is first and foremost a believer in the Lord, not a scientist. He doesn't define his life by what he has discovered or written about, but rather by where his heart is and how he acts through his beliefs. ...

He doesn't let his scientific values govern his core religious beliefs, and why should he? If someone is serious about following the Lord, then conforming to a certain scientific theory and all that comes with it seems extremely limiting because science itself is limited to the study of the natural world.

So, as far as the idea of Intelligent Design and all theories for that argument goes, there will always be critics and rightly so. But, as Dr. Collins showed, just because a scientist claims to support a certain theological idea, doesn't make him or her an unreliable scientist or a weak believer. It makes him or her a broken human saved by grace who uses this salvation to honor God through the study of the natural world. [Emphasis added]

But ID has nothing to do with religion!