How Can We Be Moral Without Religion? 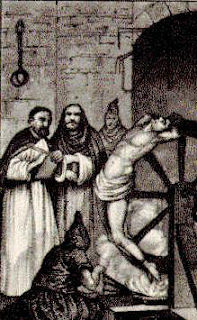 How can we be moral with religion?


After 60 years of attending a Tennessee church, a family in Collegedale has been exiled because they supported their daughter while she fought for same sex benefits from the town where she worked as a police detective. ...

[L]eaders at Ridgedale Church of Christ gave Kat Cooper's mother, aunt and uncle an ultimatum during a private meeting after worship services on Sunday.

"They could repent for their sins and ask forgiveness in front of the congregation. Or leave the church," The Chattanooga Times Free Press reported on Wednesday.


"My mother was up here and she sat beside me. That's it," Kat Cooper explained to reporter Kevin Hardy. "Literally, they're exiling members for unconditionally loving their children — and even extended family members."

Ridgedale Church of Christ Pastor Ken Willis said that something had to be done because the family was publicly endorsing homosexuality by supporting their daughter.

"The sin would be endorsing that lifestyle," Willis insisted. "The Bible speaks very plainly about that."

Where, exactly, in the Bible does it say you have to abandon your child just because he or she is a "sinner"? I thought everyone is supposed to be a sinner, so why aren't every parent expelled from their church for endorsing their child's "lifestyle" of sin?

Who are the heretics? Those who would cast the first stone, or those who follow 1 Timothy 5:8:


But if anyone does not provide for his relatives, and especially for members of his household, he has denied the faith and is worse than an unbeliever.

Comments:
Sad. My church has gained a fair number of members who were kicked out of other local churches for similar reasons. But you never hear of anyone getting kicked out of a church for exploiting the poor and the marginalized, and the Bible has a LOT to say about that.

But you never hear of anyone getting kicked out of a church for exploiting the poor and the marginalized, and the Bible has a LOT to say about that.

It's enough to make you wonder if most curch goers actually ever read the thing.

Well, I also am pretty heavily involved with institutional church life, so fwiw, from a completely unscientific survey, I suspect that a lot of churchgoers have not read it, though at my church we do a lot to encourage people to actually read the thing.

However, the bible is difficult and very alien to our own culture; it is time-consuming to read and make sense of; & many people who go to our church have demanding jobs and family responsibilities and not a lot of free time.

otoh -- I have noticed (again, very anecdotal and unscientific) that those who do read and study it tend to have much more nuanced views about what "the Bible says."

Among other study opportunities, we offer a four-year intensive study course -- 9 months a year, meeting two hours a week, and it is based on workbooks and video instruction from biblical scholars and theologians from a mainline denomination (i.e. Evolution Is Just Fine!!).

Over the past several years, probably close to a hundred people have participated, some of whom I have known before they took it. So fascinating to watch how their views on so many issues changed after reading and studying the actual Bible.

But it is sooo alien to our own culture that it is a real challenge -- not just the foreignness of it, the distance of it from our own social locations; but the critiques of what, in particular, Americans hold up as success in family and economic life.

The Old Testament also prescribes the stoning to death of adulteresses and rebellious children, if I remember correctly. I don't see families being thrown out of churches for failing to apply those choice little penalties.

As an aside, this acquaintance belongs to a little-known denomination which actually tries to live as Christ and his disciples did. They have no cathedrals or churches or even meeting-houses of any kind. Their clergy, for want of a better term, are simply traveling preachers who own little more than the clothes on their backs. They are almost entirely dependent on the charity of the ordinary members of the church for food and shelter.

I may not share their beliefs but I do respect their attempt to live their faith rather than amassing great wealth and building obscenely big and extravagant mega-churches.

I get the impression that what a lot of American believers, although not all, want from their religion is a comforting endorsement of their personal preferences and prejudices rather than a challenge to rise above them or cast them aside. The pernicious prosperity gospelers are a good example of what is wrong with American Christianity

Morality is biologically driven. Without morality and I don't mean sex, I mean sharing, honesty, making oaths and alliances and promises, empathy, etc, We would have never beat the big cats in our evolution as a species. Once a person frees themselves of doctrinal religion, which is just myth anyway, one is freer than they have ever been. Being 63 and losing my religion in the 1970s, I know this for sure. We have enough bullshit to deal with in this life so don't waste it on supernatural mumbo jumbo.

what a lot of American believers, although not all, want from their religion is a comforting endorsement of their personal preferences and prejudices

Just to mention one minor example: If they don't like the idea of being physically related to monkeys, but aren't up to the task of going through the science, they can make up a religion which tells them what they want to hear.

You've been reading Jerry Coyne's not-blog too much. ;-)

a lot of American believers, although not all, want from their religion is a comforting endorsement of their personal preferences and prejudices rather than a challenge to rise above them or cast them aside. The pernicious prosperity gospelers are a good example of what is wrong with American Christianity

Agreed. And if a church is essentially an echo chamber of the culture at large, I tend to assume that's a church with a lot of Biblical illiteracy. And God knows the gospel of America is prosperity!