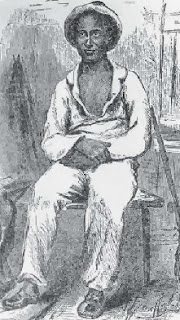 Lamar White, Jr., at his excellent blog CenLamar, about all things Louisiananian, has the story of his great-aunt, Sue Eakin, a history professor who "spent most of her career researching and editing 12 Years a Slave," the autobiography of Solomon Northup, a free black man who was kidnapped in Washington, D.C. in 1841 and sold into slavery. It has now been made into, as they say, "a major motion picture."

For me, the heart of Sue's story is this:


[W]hile visiting a neighbor's home at the age of twelve, she discovered a well-torn copy of Northup's book and read, for the first time (albeit only briefly), about the terrible things that occurred in her own backyard. It must've seemed like a great mystery to her, an unsolved crime, maybe even a betrayal, this old book that told a story everyone around her seemed all too eager to forget. ...


However, six years later, when she was attending Louisiana State University, Eakin chanced upon a copy in a local bookstore. She asked the owner how much it cost. "What do you want that for?" he asked. "There ain't nothing to that old book. Pure fiction. You can have it for 25 cents."

As Eakin later observed, "I spent the next seventy years proving him wrong."

What a wonderful and worthy epitaph! Would that I could claim one half as good.

Then Lamar turns to today:


Louisiana is the prison capital of the world. Quoting from The Times-Picayune:


The state imprisons more of its people, per head, than any of its U.S. counterparts. First among Americans means first in the world. Louisiana's incarceration rate is nearly five times Iran's, 13 times China's and 20 times Germany's.

Are the people of Louisiana really the worst, most criminal, people on Earth? Or, maybe, its government is just the worst ... a possibility that is reinforced by the fact that "although nearly 65% of Louisiana is white, the vast and overwhelming majority of prisoners in Louisiana are African-American."

Go and read Lamar's post. It is touching, uplifting, depressing and infuriating in turns. Well worth the effort.

Comments:
There was a very good interview recently on "Fresh Air" about this movie.

At least now, when right-wing ideologues boas and bluster and get all nostalgic about "American exceptionalism" and how country was built on Judeo-Christian faith, they can be told to go and watch this movie and then tell us again how exceptional and Christian white America was.