Please Tell Me He Was Kidding! 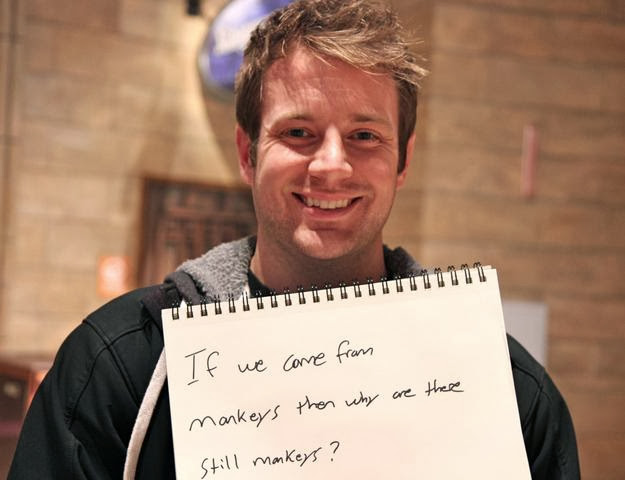 This is all over the web. As PZ Mxyzptlk noted, "Matt Stopera went to the Nye/Ham debate, and gave the creationist attendees a chance to speak their minds: he let them write a question on a sign for Bill Nye and then took pictures of them."

This is only slightly better than the nutbar "science teacher" In Louisiana who "informed" her students that, "if evolution was real, it would still be happening: Apes would be turning into humans today."

Of course, the answer is some variation on "If you are descended from your grandparents, why do you still have cousins?"

P.S.: James McGrath has been usefully compiling after-debate reactions (Christian, atheist and secular alike) here and here. Outside of YEC sites, it appears there is a consensus that Nye "won" (there is no such thing as really "winning" in debates with YECs).

Comments:
Bill Nye seems like a nice guy and he did well enough but looking at Ham made me long for the mordant humor, overwhelming self-confidence and occasional brilliance of a Christopher Hitchens.

I haven't watched it yet ... and may not, except Nye's parts ... but I know what you mean. On the other hand, Nye, with his earnest but not threatening demeanor, might have been just the right person to possibly get through to some of the YEC audience.