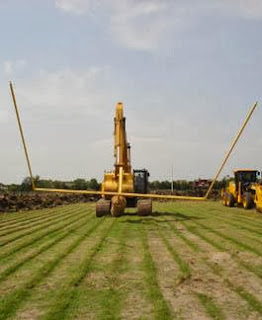 According to, Al Mohler, president of The Southern Baptist Theological Seminary, they are not bigots, out to impose a new round of Jim Crow laws on LGBT people, where people in businesses of "public accommodation" can refuse to serve some minority ... think Lester Maddox and axe handles ... they just don't want to be forced to participate in ... to celebrate ... same sex marriages! Thus we must have laws all across America to protect the tender consciences of Christians!

And examples of this are "now piling up," though, strangely, they all seem to resemble the same few instances we've heard about for a couple of years now: "[a] wedding photographer in New Mexico, cake bakers in Colorado and Oregon, and a florist in Washington State ..."


[T]he key issue is not a willingness to serve same-sex couples, but the unwillingness to participate in a same-sex wedding. Christian automobile dealers can sell cars to persons of various sexual orientations and behaviors without violating conscience. The same is true for insurance agents and building contractors. But the cases of pressing concern have to do with forcing Christians to participate in same-sex weddings — and this is another matter altogether.

It has something to do with "artistic ability" and "expressive ideas."

As long as Christians aren't forced to participate, their consciences are safe!

So the contraceptive mandate of the Affordable Care Act is no problem as long as the Christian employers aren't asked to roll on the condoms, swallow the pills or (Heaven Forfend!) actually participate in the sex, with or without "artistic ability" and "expressive ideas" ... right?

That sound you hear is the motors of the goal posts being revved up.

Personally, I might be willing to allow some businesses involving "artistic ability" and "expressive ideas" to refuse to cater to same sex marriages if, and only if, they are required to post prominently, near the entrance to their business, in very large type, something like: "We reserve the right to refuse to serve people who we deem morally and socially corrupt."

Something tells me, in that case, the problem will be self-correcting.
Link - Posted by John Pieret @ 5:27 AM

Comments:
You're a lawyer here. How about let any business refuse to serve anyone for any reason, and let the market sort it out?

I mean, even today a Klansman can run a barber shop, but can't have a sign saying "whites only". But I don't think there's a law against putting a sign up that says "I hate black people and I'm carrying scissors"

There are such things as implied threats ...

But I am not totally unsympathetic to letting the market sort it out ... that was the point of saying anyone who wants to discriminate has to announce that bias clearly as a means of self-correction ... ultimately, that will be a much more effective way to handle it. It's no accident that, much to the chagrin of the bigots, the Fortune 500 companies are all but 100% behind gay rights and benefits. The most effective voices against the Arizona law to allow discrimination against gays, awaiting the Governor's signiture, is the business community who doesn't want Arizona in general labeled as a bigoted state. The Kansas senate, much to the surprise of proponents and opponents alike, scotched the law pending in that state that would protect the bigots, no doubt due to the business wing of the Republican party.

The LGBT community is winning in no small part because big business wants no part of discriminating against them.

Still, there is no good reason to let mom and pop businesses to discriminate with no consequences whatsoever.