The Rape of the Sabines 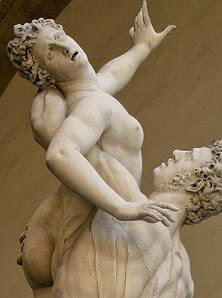 According to legend, shortly after founding Rome, Romulus and his followers, who were seriously short on females, set up a ruse to "rape" (abduct) the women of a nearby tribe call the Sabines. After some unpleasantness, cooler heads prevailed and the Sabines joined with Romulus and became Romans.

It's not quite as bad ... or as good ... as the situation recently in Sabine Parish, Louisiana.

But the most egregious aspect was the same teacher joining in bullying a student, right in class, because he is a Buddhist. And, when the parents went to complain to the school superintendent, they were told that "this is the Bible Belt," and that that they should simply tolerate [the teacher's] proselytization because "[t]eachers have religious freedom." The superintendent went on to wonder whether the child "has to be raised Buddhist" and even asked whether he could "change" his faith.

Back a couple of months ago when I first ran across this, I predicted one of two outcomes. One, the district's insurance carrier would force a quick settlement, with all costs paid by the insurer. Or, two, the school board, probably seduced by some faux legal foundation, such as "Liberty Counsel," would put up a fight, still lose, and wind up having to pay costs out of the taxpayer money that should go to the kids' education because the insurance company disclaimed.

Fortunately for the young people of Sabine Parish, the first scenario seems to have prevailed.

A settlement and consent decree has been entered in the Federal District Court case that is, to say the least, sweeping. While, the school board, school superintendent and the awful teacher admit no wrongdoing the list of things they can no longer do is extensive and telling. Among the highlights:


~ School Officials shall neither offer nor participate in a Prayer during or in conjunction with a School Event.

~ School Officials shall prohibit non-student third parties (including, but not limited to, clergy or other religious leaders) [from offering prayers at school events].

~ No Religious Service commemorating the graduation or grade-promotion of a class of students shall be comprised, led, or directed by School Officials in their Official Capacity.

~ The District and School Board are permanently enjoined from permitting School Officials at any school within the School District to promote their personal religious beliefs to students in class or during or in conjunction with a School Event.

And, to my mind, the most important of all:

The school board is required to provide a copy of the Order to all teachers and administrators and conduct training by a lawyer (probably provided by the insurance company) of school official's obligations under the Consent Decree and under current First Amendment jurisprudence. The training is also to include the psychological and developmental impact of religious discrimination on students. This traing must be developed in consultation with the ACLU.

The Order applies to all students, present or future, not just to the plaintiffs in this case and the court will retain jurisdiction over the matter for at least ten years. Thus, violations of the Order can result in further judgments or sanctions merely on a showing of a violation.

The plaintiffs were awarded nominal damages but the ACLU got $40,000 in legal fees (which the insurance company no doubt thinks is getting off cheap), the plaintiffs get $4,000 to recompense them for transport costs of their son to a distant school that is somewhat less biased and the school has to pay for bus service for the student to the new school until he graduates (which the school board ought to consider getting off light!).

All-in-all, a satisfying outcome. Now that cooler heads have prevailed, maybe the Sabines can join the rest of the country in forming one nation under the law.
Link - Posted by John Pieret @ 3:28 PM


Good write-up. I definitely love this site. Keep it up